The County Sheriffs of Colorado believe the focus should turn to mental health. Better funding for screening, treatment, education and government-supported mental health facilities should be addressed, not gun control. As president of that organization, McKee is leading the fight against any state legislation that could limit Second Amendment rights.

-Sheriff says he takes an oath to protect and defend the Constitutional Rights of the people who live in his County. Period.

-The County Sheriff’s of Colorado have a position paper in response to recently signed bill by Colorado Governor. Read Here http://www.csoc.org/ppdocs/GunControlLegislation.pdf

-A well regulated militia and self defense are what the 2nd. Amendment is about

-We asked the Sheriff if we were in a restaurant where a shooter is intent on killing as many people as possible does he want us to take action with our own weapon?

-Having more guns “Out there” equal less or more criminal use of firearms? 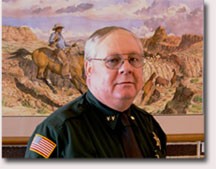