How the Manipulators Can Actually Make You Richer

Please, please ignore all of the BS about manipulating with CBs and bullion banks. It gets us way off focus if we allow ourselves to feel that we have no chance because it’s a rigged, manipulated system.But, I do understand that sentiment, But here’s the reality and also the good news. All markets have always been manipulated, both legally and illegally and they always will be. However, the internal technical structure of markets have not changed one iota since I started at this over 20 years ago. All liquid markets move based upon one thing only – LIQUIDITY. That’s it. How does LIQUIDITY manifest itself? SUPPLY and DEMAND. What is the only method in which you can truly judge what the real world, in real time, SUPPLY and DEMAND balance is? It’s by understanding the intricate interaction between price and volume on a chart. That is the ONLY way. It’s the method that I learned thru osmosis when I was a young floor trader in Chicago.

One of my mentors was the greatest analyst that I’ve ever been around. He wasn’t the greatest trader that I knew, but as an analyst certainly he was. For a few years I swore that he had inside information or a crystal ball. It was remarkable how accurate that he was. I used to hang around him like a puppy waiting for treats, as he would occasionally toss a valuable lesson to me.

And over the years I honed this method for what best works for me. And guess what. What do you think is the basis of this method? It’s built upon alerting us to what the actual manipulators are doing. Amazing, isn’t it?

And the father of all of this work is the brilliant Richard Wyckoff —- http://www.readtheticker.com/Pages/IndLibrary.aspx?65tf=84_richard-wyckoff-method —- If you want to truly, truly understand how real markets function, read all you can from his vast writings. I am certainly no genius. I didn’t figure any of this out. I’ll never be able to “discover” anything profound. But I’m pretty good at cobbling together things that others have “discovered” and make that work for me. So learn to follow what the manipulators are doing.

Is it that easy? Certainly yes, but definitely no at the same time. Let me explain. Yes it is that easy if you can learn and then accept the idea to just follow what the manipulators are doing, as they are almost always right. But, here’s the problem. It takes a long time to learn this method, and even longer to learn how to implement it with real money. And we’re humans, we’re fallible. We have emotions and poor judgement at times. That equals losses. But every great trader that I’ve known/ do know, uses some variation of a price/volume (supply/demand) method.

To put it simply: there are three TRENDS – up, down, and sideways. Sideways TRENDS are called TRADING RANGES. And sideways TRENDS are either (a) the end of the previous TREND, meaning a topping process or a bottoming process. Or (b) a pause in the TREND, giving the market a chance to rest and to gather enough energy to continue pushing higher. So an UPTREND is when DEMAND is generally in control and a DOWNTREND is when SUPPLY is generally in control.
Looking at the ten year chart of the Dow below, there are 5 things I’d like to point out for examples. Four of those examples are looking in a rear view mirror, but still great educationally. (a) Notice the trading range from the summer of 2007 thru the spring of 2008. That was a major top forming and ending the previous bull market.

(d) Then the huge bull market that generally pushed higher until potential signs of a top started appearing in 2015. But notice along the way the little trading ranges that formed allowing the market to gather strength again for another push into new highs. It was during this time that I continued to come on the show, as Patrick and Andrew know very well, and tell listeners to ignore all the claims of a stock bubble and crash. And I constantly advised folks to use all price weakness as a buying opportunity.
And lastly now notice the broad trading range for the last 18 months. If you’re bullish, you believe thatit’s the market pausing and gathering energy for a push much, much higher. But, as you know, I’m bearish, I believe that it’s a top, and I’m shorting stocks into strength. So what am I watching for now. If/when we push back down to the support area around 15,500 and the volume begins expanding relative to the two prior occasions, then the PROBABILITY of a much bigger selloff will be very high. And visa versa. Learn to “listen to the market”. Though I will add that there are several other tools that I use to hone in on the timing and the price supports more specifically. But I’ve generally laid it out there.
So please ignore all of the whining about manipulation that’s a constant theme on the net. Absolutely there’s massive manipulation going on all the time. But I have chosen a goal of being consistently profitable in markets, not blaming everything under the sun for why I’m not succeeding. The blame game gets us nowhere and is a wonderful way to ensure consistent losses. Don’t allow yourself that approach. Of course, as all of you know, that’s true in every aspect of your life. Why would trading/investing be different. 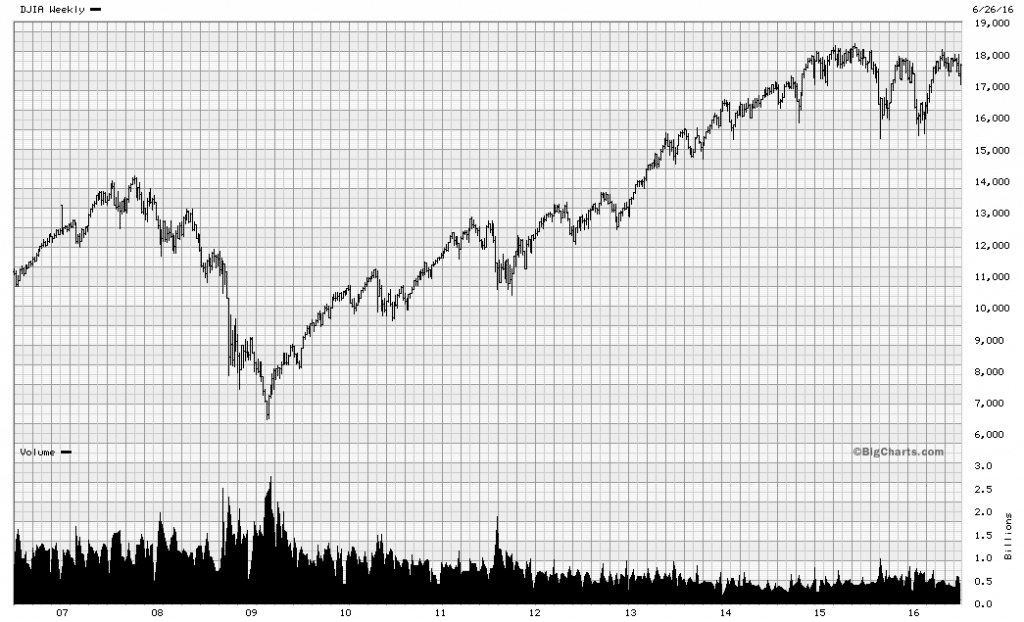 'Trader Scott – How the Manipulators Can Actually Make You Richer – June 30, 2016' have 4 comments