To the folks who like any 1980’s big hair rock music, you’ll enjoy the linked song below. And for those with any music skills, it’s not a hard song to learn.

Most importantly, I gave myself a little chuckle from the irony of the whole Brexit thing. The name of this classic song from the band Europe is entitled “The Final Countdown”.

I learned long ago that to succeed as a trader, you need to always be prepared and to have a plan. That way you can ANTICIPATE market moves rather than REACT to market moves. And this way volatility can become your bestie , instead of being your mortal enemy.
So even tho I find it hard to believe “they” will allow a Brexit vote to win, I’m not wasting time attempting to decipher what the market effects will be. I view Brexit the same way that I do as with any upcoming known event. That is, as a potential opportunity to take the other side. And that depends on the overall TREND of the market. In other words, if I believe a market is in an uptrend and technically bullish, and then the event “causes” the market to sell off, I will potentially buy into the selling wave. But only if the market reaches price levels where I have identified as low RISK entry points.

And I have fairly extensively covered my outlooks for the various markets in my previous posts, so folks can refer to those for price levels. But just to add I have seen nothing to change my mind about any of the markets, except possibly the US$. But I’ll cover that in another post. There will be plenty of volatility around Brexit, but if you’re prepared and have a plan you won’t be freaking out, or at least you shouldn’t be freaking out.”

————————————————————————————————————————————————-
So, that’s the general thought process going into Brexit. Now more specifically. The most important thing to understand is what I keep harping on. What is the TREND of the market. I said that I had seen nothing to change my mind about any of the markets, except possibly the US$. As readers know, since my Nov. 2015 archived outlook, I have been steadfast in my belief that stocks were putting in a large, potentially very large, top – meaning that I believe that the TREND is down. And in a DOWNTREND the highest probability trade is to SHORT at RESISTANCE AREAS. And I have previously explained my active shorting strategy (also archived) which I am now employing regarding stocks. And re: gold, you know that I’m now extremely bullish ( gold in an UPTREND, therefore BUY at SUPPORT AREAS). And lastly re: US$, (and I’ll explain my slight change in outlook for the $ later), I’ve continually stated that I believe that the recent US$ weakness is a pause before having at least one more large rally. I’ve see abundant commentary from the “respected” analysts who keep claiming that the $ is toast. I completely disagree (for now).
So here goes. The first chart below is the 4 year weekly chart of the Dow. The SUPPORT/ (highest probability area to consider covering short positions) is the 15,500 area and the RESISTANCE/ (highest probability area to sell short) is the area above 18,000. My plan was to wait until after the vote to start putting on more short positions. However, (please refer to the second chart below which is a 3 month chart) with the absurd and bearish poor quality buying that began showing up in the few days before the vote, I decided to put on an initial short position into the close of trading on Thursday. As an aside, I was stunned by the hedge fund clowns who were foolishly buying into that rally.This technical action, which I can’t explain in detail in this post, was very bearish to me, so I put on a small short position in US and European stocks. If the market would have thrust higher after the vote, my plan was then to add more to my short position into strength. But obviously, I didn’t. What I did do was to cover part of the short position on Friday. If there is extreme selling the next few days, I may cover the rest. So my strategy in general remains the same now as before the vote. I believe that stocks are in a bear market.

Big rallies are shorting opportunities for me. Conversely, I might take small long positions for short term trades if the selling gets extreme. But I’m much more interested to be short – I believe that is the lowest risk position for awhile.
As for gold, I did nothing. My overall view on gold is the same. But please be careful buying gold right now. There will be selloffs to buy into. Do NOT buy into the big surges higher. But for the folks who listened to my advice last Dec. — https://oneradionetwork.com/trader-scotts-blog/trader-scott-my-intermediate-outlook-changed-to-bearish-on-stocks-for-the-first-time-in-over-4-years/ — and bought gold into that extreme price weakness, you have the “luxury’ of not feeling like you “have to” buy gold now.
As for the US$ and currencies, I did nothing. But, and I will go into more detail in a future post, I believed the technical structure of the US$ was becoming extremely bullish going into the vote. My belief, as I’ve stated several times, has been and remains that there will be another deflationary scare starting mid-summer with a large, possibly huge, top in the US$ to occur this Fall. But we would head lower before then. However, the extremely bearish technical action of the foreign currencies changed my belief about the timing. I could see the urgency that the large interests were displaying to get out of their foreign currencies right before the vote. I don’t know if they knew something or not, but all that matters to me is what/how they are buying or selling and with how much urgency. It’s exactly what my technical trading method, which I honed over many years, alerts me to. So because of the technical action of stocks, currencies and gold on Wednesday and then into Thursday, I started to question my assumption that the “Leave ” vote would lose. ( The large, well “informed” capital uses rallies to sell and selloffs to buy.) So anyways, I became much more bullish on the US$ into the vote, and my plan was to buy more dollars after the vote into weakness, but obviously I didn’t get the chance.
So, to wrap up, Brexit has not changed my bigger picture view of markets one bit. Coming up I will talk more about what the effects economically and more importantly, for our purposes, on markets, will be. 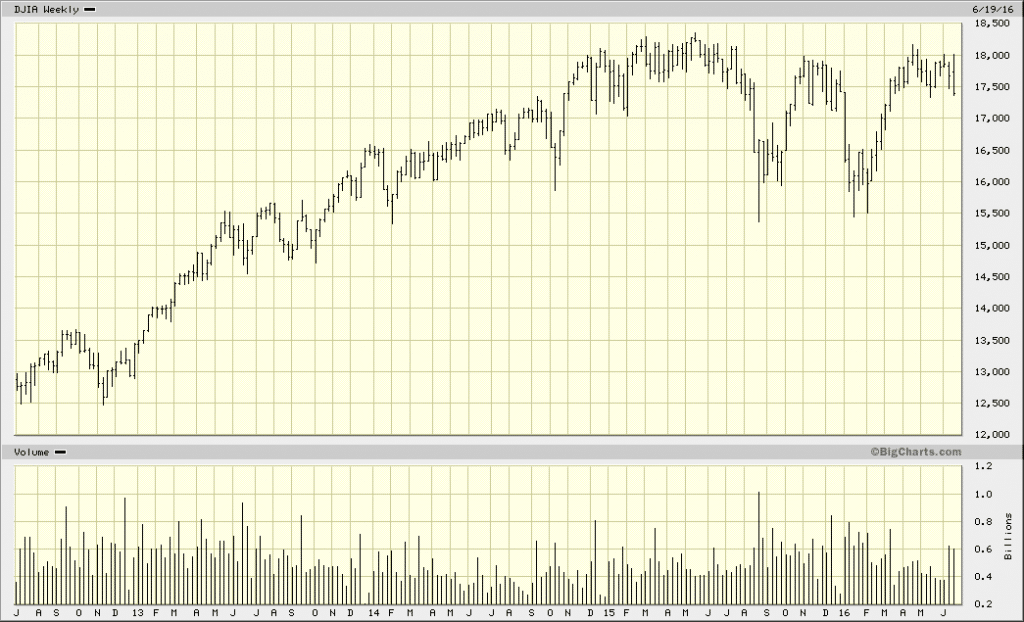 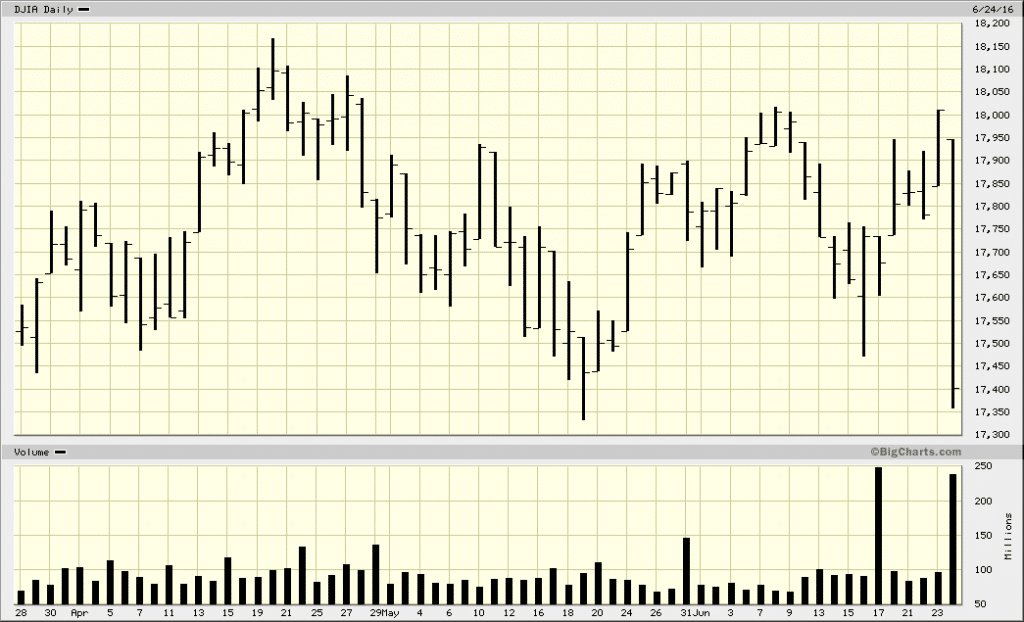