THE MORNING SHOW with Patrick Timpone 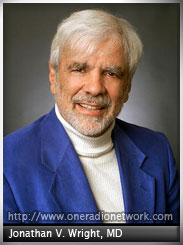 Dr. Jonathan Wright is the Medical Director and Founder of Tahoma Clinic in Renton, Washington, where he also practices medicine. He is an internationally know author and speaks nationally on various topics. Dr. Wright received his medical degree from the University of Michigan.
Dr. Jonathan Wrights approach includes a full health evaluation, working to normalize body biochemistry and energies by natural means. Nutrition and individual nutrients are assessed for optimal amounts for you, with progress measured as appropriate. Digestion, assimilation, metabolism, nutrient deficiencies and excesses, allergies and toxicities, and hormone balance are all considered.
We will cover thyroid issues, blood pressure, Vegetarian and Weston Price Diets, Heavy Metal Detox protocols and much more.
Website:http://tahomaclinic.com/