Author of Grass, Soil, Hope: A Journey through Carbon Country

Can Proper Soil Management Slow Climate Change?
Last year, the CO2 level in our atmosphere eclipsed 400 parts per million for the first time in five million years (scientists seem to agree that a habitable CO2 level is around 350 ppm). Researchers furthermore project that, given our current path, we will near 600-700 ppm by the end of the century. In the face of such news, is there any reason to sustain hope or any meaningful action we can take? That’s what city boy-turned-carbon rancher White asked well before these numbers became so alarming. What he found over the past two decades is that there is a way to take carbon out of the atmosphere and bind it to the soil. In Grass, Soil, Hope, he lays out this science and practice, making clear that not only do we all have a stake in this work, but we all–from gardeners to ranchers, countryfolk to urban dwellers–can and must contribute to it. By expanding the use of low-tech efforts already employed around the globe–such as no-till farming, composting, restoring degraded watersheds and producing local food–we might be able to make a critical difference.

-The positive role of carbon

-Storing excess carbon in the soil through photosynthesis

-How would having more carbon in the soil cause it to soak up more?

-Why tilling is bad for the soil; how to garden without tilling 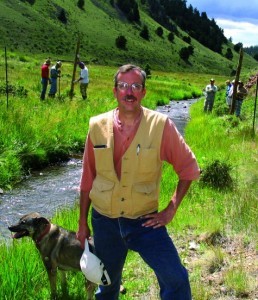 'Courtney White – Can Proper Soil Management Slow Climate Change? Taking CO2 from the Atmosphere and Putting It Back Into the Soil – June 23, 2014' has 1 comment