Cows Save the Planet: And Other Improbable Ways of Restoring Soil to Heal the Earth

Could it be that the answers to some of our most challenging global problems involve neither advanced technologies nor the lion’s share of our national treasuries, but the humble layer of soil beneath our feet?

In Cows Save the Planet, Schwartz responds with an informed and enthusiastic “yes.” The problem, however, is that we’re losing topsoil somewhere between ten—in the United States—and forty—in China and India—times faster than we’re regenerating it. Schwartz illustrates how focusing on soil restoration will allow us to chip away at the seemingly insurmountable problems we currently face.

As for the title, Judy maintains that cows get a bad rap: “[T]he common assumption today is that cattle are ecological bad news due to overgrazing and the methane they emit as a result of their digestive process. Cattle (and other grass-eating animals) do have an effect on the environment–but how they’re managed determines whether the impact is destructive or beneficial.” She explains in this interview 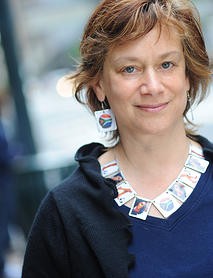 'Judith Schwartz – Cows Save the Planet: And Other Improbable Ways of Restoring Soil to Heal the Earth – May 21, 2013' has 1 comment