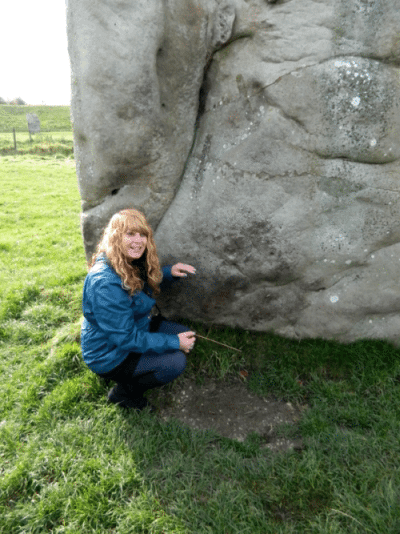 Maria Wheatley is a writer, dowser and researcher of earth mysteries specializing in the geodetic system of earth energies and ley lines. She organizes regular tours of sacred sites and medieval churches and cathedrals in the South West of England to locate and interact with the monument’s hidden energies. Her late father was considered a Master Dowser who discovered the hidden chakra system within Glastonbury Abbey and how it was ritualistically used by the Royal Bloodline. For the past ten years Maria has continued researching the many ways in which our prehistoric ancestors harnessed and utilized the Earth Force. Her thought-provoking explanation of how ley lines originally channelled light into megalithic temples, and how standing stones sited upon certain circular patterns of earth energy absorb and transmit the Earth Force challenges our perception of ancient sites.
Maria has studied Landscape Archaeology with the University of Bath in Swindon, has written holistic diploma courses for the British School of Yoga, teaches reflexology, dowsing and past life regression for Swindon College and is co-author of Avebury Sun Moon and Earth a popular book which reveals the many ley lines and earth energies which were skilfully integrated into the megalithic architecture of Avebury Henge, a gigantic megalithic power centre in Wiltshire, England which contains the world’s largest stone circle. She has appeared on the History Channel, BBC radio and has lectured for the British Society of Dowsers, and she regularly gives talks and presentations for dowsing and spiritual groups in the UK. Maria has also written numerous articles for Prediction Magazine and the British Astrological Journal.

-What are ley lines?

-Geopathic stress and deciding where to build a home; should it ever be built over underground water?

-Why do we care about the energy of Stonehenge and other sacred sites?

-Harnessing the healing energies of the Earth

-Enhancing the energy of your water

-The benefits of imploded water devices