Paul Gautschi has been a gardener for over 55 years and is known locally as a master arborist. In 1979 Paul and his family moved to the Northern Peninsula of Washington from California. As a father to 7 children, he has primarily raised food for his family and friends – never to sell. Paul has given lively tours of his orchards and gardens to international groups from 1 to 450 who also have enjoyed the fruits of his labor. 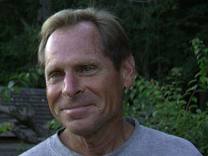 -This is Paul’s fourth time as a ORN guest.  See prior shows for more details on his wood chip method of gardening.

-The earth requires a covering.  Paul’s method of gardening features covering the ground with wood chips . 3-4″ deep in the garden. 1.5 foot deep in the fruit trees.

-Wood chips have fungi.  Grass and leaves don’t.  Mushrooms grow freely in his garden due to the wood chips.

-When he first started his garden 38 years ago, the wood chips broke down quickly because the soil was so hungry.  Now he hardly has to add any more wood chips.

-There is abundance in nature.  No shortage ever, that occurs only when people show up.  People have had wrong influences, are motivated by greed, and it’s destroying the universe

-In October, his potatoes are still green and blooming, his arugula is a foot wide.

-200 years ago, when we took the land from the Native Americans, who had tended it,  there was 8-12 feet of topsoil.  Now there’s not even 8 inches of topsoil and the ground looks cracked and brown when looking down on it.   It takes 100 years to build 1 inch of topsoil.

-What we’re doing today is insanity.  Exposed, compacted soil is dead.  Soil gets compacted when you take the covering off.

-In the forest, soil is not compacted.  But no one gets that.

-It’s critical to have animals grazing on land.  Without animals you get desert.  Deserts arise from poor management.  In Africa, they’re bringing in animals and restoring the desert.

-Potatoes are an incredible, powerful food .  Great as a survival food; easy to grow.  They’ve been changed though.  Yellow and purple flesh ones are better than white.  In September he harvests the same day as he plants, putting the biggest potato  back in the same hole in the ground where he harvested one.  Don’t cut the potato in pieces.  Potatoes create a shoot form every eye.  More eyes, more shoots.  Planting a larger potato means more food.    Put the material back on the soil so nothing is taken away.

-Paul gets free chips from electric companies and arborists.

-Organic food costs so much because of the constant weeding required.  Weeds grow because the soil is exposed. With his wood chip method, Paul doesn’t get weeds and he never has to till.  Nothing in nature ever rotates crops.

-Seeds have a brain and can choose where they want to live.  Nature has a brain.

-What does Paul feed his chickens?  He feeds them what he grows.  Kale, grass clippings, weeds.  Cracked corn is dead food.

-Everything in nature is recycled.  Everything is free and yields abundance.

-How much soil is the minimum needed in a pot?

-The coldest it gets where he lives is 8 degrees, but that’s very rare.  Usually 20s are the lowest temps.

-Even in Artic temperatures, the ground is covered and doesn’t freeze.  Animals survive all winter.

-Paul doesn’t go to a store for anything.  His food is better now, always getting better, and is health is better than it was 20 years ago.

-His food is so dense that apples don’t turn brown when cut.

-Where to get purple seed potatoes?  Fedco in Maine.  Once they start growing, use your own.  Plant in the fall – you already have the hole dug.

-Is there a role in eating fat to rebuild nerves?  Eat live food, it will support everything you need in your body.  Eat fresh in season.  Eat raw as much as possible.

-GMO drift- is that a concern?  Create hedges for protection.

-Sheep are an asset on pasture.   Paul’s pasture is low and is fed by the runoff from his trees.   Sheep lay down on Paul’s pasture because they’re satisfied and don’t need to eat all the time.

-Chemical fertilizers have no minerals.  Minerals are the foundation to life.

To see videos from tours of Paul’s garden, search on L2Survive on Youtube.  Or Google:  Paul Gauchi back to eden.

Paul Gautschi and his insights and experiences with gardening and living with nature, October 10, 2017