Our Time to Shine

David Icke is an English writer and public speaker who has devoted himself since 1990 to researching what he calls “who and what is really controlling the world.” David has written 16 books explaining his views, characterized as New Age conspiracism, and has attracted a substantial following across the political spectrum. His books have been translated into eight languages, he runs a website that receives 600,000 hits a week, and his lecture tours, during which he speaks for up to eight hours at a time, attracted audiences of 30,000 between 2000 and 2006.His 533-page The Biggest Secret has been called the conspiracy theorists Rosetta Stone.

David joins us live form UK to talk about recent events, his tours and of course why its our time to shine. 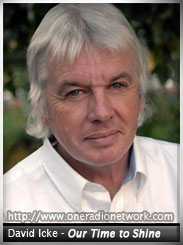