F. William Engdahl is our ‘go to’ man for the latest and, what we feel, an objective view of the current world politics. He has written on issues of energy, politics and economics for more than 30 years, beginning with the first oil shock in the early 1970′s. He has written Seeds of Destruction: The Hidden Agenda of Genetic Manipulation, A Century of War: Anglo-American Oil Politics and the New World Order, Gods of Money: Wall Street and the Death of the American Century and Full Spectrum Dominance: Totalitarian Democracy in the New World Order.

-Why is the West creating more chaos in the Middle East and North Africa?

-U.S. teams up with Al Qaeda in Syria, what’s that about?

-Cyprus is not about palm trees and blue water, but natural gas and Russia

-Mr. Engdhal predicts Greece soon to be out of EU

-Libya, Egypt and Syria; The proof of U.S./NATO meddling is in the pudding

-Mr. Engdahl – “Afghanistan is a colossal failure for The United States government…”

-So who listens to Hillary Clinton?

-The Eurasion Land Bridge and how using railways build markets

And much more. Enjoy! 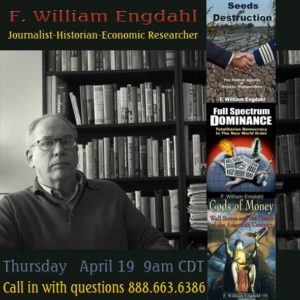