Everything Is a Rich Man’s Trick

“All terrorism is fake. It is a military deception practiced by the rich upon the poor in an ongoing class war. Their most important weapon in this class war are television presenters. The BBC has actually become The Ministry of Truth of George Orwell’s 1984….Why is this happening right now? It’s happening because we no longer have an enemy. We have an unprecedented situation in which there is only one super state: the Anglo-American alliance…..The ruling group maintain their position in society by controlling the masses through fear. In order to make us believe that we must live in fear, the rich had to provide us with a new foreign enemy, a “bogeyman” who wants to conquer the world. The moment you have a world at peace, the keystone in the arch of ruling class power is gone. Every year America’s oligarchs take three trillion dollars out of America’s economy. This is how the rich have rigged the system – so that it benefits them at the expense of everyone else all of the time. To keep this fraud going, the public must be convinced of the need for military expenditure, and this is where all of the phony terror attacks come in. Here is Orwell’s definition of totalitarianism: ‘ A society living by and for continuous warfare in which the ruling caste have ceased to have any real function but succeed in clinging to power through force and fraud.’ 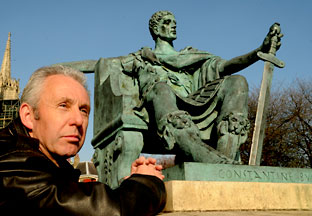 It ought to be obvious by now that our seemingly endless economic recessions are being deliberately orchestrated…. What are we to do about all of this? For Americans, it is obvious that we must honor the memory of JFK by finishing his work and finally ending the CIA. The only way to change our corrupt system is through revolution. Americans must march on Washington as they did for Obama’s inauguration, but this time to remove all corrupt men and women from positions of power. “

-1914 – first incidence of one country (England) manufacturing weapons of war (ships) for another country (Germany). Start of the arms race. Triggered WWI. International businessmen wanted to protect their money invested in foreign countries.

-Started with the Rothschilds, the marriage of Lenora, and the split of which families got which countries. Other families joined later. See “The Money Masters” on YouTube to find out about the big players. Also, check out George Orwell’s “1984” and essays.

-The rich must achieve their ends in psychologically acceptable ways. Can’t just start attacking people or they’ll be attacked back. If they start a war and send bombers, they can say we’re defending you to protect you. Always done in this kind of disguise. Keep people in a depressed state, in a drudge, concerned with day-to-day survival. War makes sure the population can’t rise up and rise above privation.

-How did WWII start? Not about any of the issues we’ve been told. Hitler was financed by a fascist cabal promoted by major European families and industrialists. Purpose was to make things difficult for ordinary people while the rich got richer. Henry Ford was selling the trucks to Nazi Germans that carried the Blitzkrieg forward.

-Deliberate sabotaging of economy led to Great Depression. When the economy started to recover, oligarchs looked for a way to put down the Bolsheviks plus a movement they could support. Hitler was their stooge, someone aggressive and psychopathic, so they financed the Nazi party.

-For doubters – look at US history. e.g. Watergate, assassinations, relationship of CIA to organized crime. US ruled by a criminalized, organized cabal.

-Is Donald Trump under the control of the cabal? “They” always support both sides. How does an “independent maverick” get so much air time? Selling him as a truth promoter. Francis’ question to Donald: how about the 7 ft. tall jihadi ISIS warriors?

-Making his movie was very hard and a draining experience. Hard to compress so much information into a short time frame.

-Listener says Clintons visit Bushes at Kennebunkport every summer, visit Kissingers at Christmas. There is a shadow government controlling the elected officials.

-Who were the forces behind the murder of JFK? Elite bankers (Hunt, Harriman, Bush, Rothschild), CIA, the mob. They let JFK be elected because they thought they had him under control. LBJ was their pawn. Salute to Robert Gaylon Ross Sr. for his interview with Madeleine Duncan Brown, available at YouTube.

-Vietnam War and all wars prolonged because they were making people rich.

-We need to face the truth about our own history or the tyranny will continue. Perhaps a trillion dollars are invested in the whole terrorist meme.

-Trump’s function is to get people believing in the ISIS boogeyman. See Russ Baker’s writings on Trump.

-One aim of disinformation is to make people feel there is no information you can trust. Do your own research. Skill comes from weeding out the disinformation. Conolly suggests “Pilots for 911 Truth”, “Architects and Engineers for 9/11 Truth”. No commercial aircraft can fly at 520 mph at sea level. No airplanes hit the World Trade Towers – laws of physics say it is impossible. Mainstream media put out computer generated imagery. Eyewitnesses claiming airplanes hit the towers were crisis actors.

-8 gunmen involved in JFK’s assassination. Driver of the car did not shoot JFK. Arnold Rowland was an important witness. JFK hit in the throat first.

-Conolly says original NOVA film about firearms researcher confirming single bullet theory of JFK assassination had some interesting information in it that was later retracted.

-Is a 4-year ORN listener Debbie who claims to have seen an airplane flying into the World Trade Towers a liar? She says she knows what she saw. Simon Shack YouTube video says a winged cruise missile flew into the building and exploded inside it. Reaction of broadcasters on 911 was fake.

-Conolly says don’t vote. The rich will see that we’ve seen through them. Is Libertarian presidential candidate Johnson also a tool of “the boys”? How do we know anyone is genuine and bona fide? Electoral fraud is rampant.

-What is the goal of terrorism in Middle East? Keeping people in a state of fear and protecting the fortunes of the rich. Muslim refugees given entry into the US.

-Why would the ruling elite want to live this kind of life?

-Debbie is invited to call in on Open Phones Friday and share her experience when she was in NYC and saw a plane hit the World Trade Tower.

francis richard conolly, everything is a rich man’s trick, august 22, 2016. hour one