Author of The Constitution of the United States: A Study Guide

3 Constitutional clashes about to divide the nation 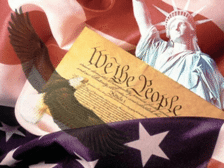 For more than 25 years, John Chambers, known to audiences as Mr. Constitution, has dedicated himself to educating Americans young-and-old about the contents, history, and meaning of the US Constitution and why the 230-year-old document is relevant to their daily lives.

Today, as our society becomes increasingly politically turbulent, its more important than ever that we understand and embrace the concepts and provisions of good governance drafted into our Constitution by the nation’s founding fathers, says Chambers, who notes that an increasing number of political groups and factions are demanding societal changes and the passage of new laws that forward their ideologies.

Many of the currently proposed changes would effectively shred well-reasoned, carefully worded, hard-won provisions in the Constitutions Bill of Rights. For that reason it becomes vital we understand the language and key terms used by the Founding Fathers in each Section, Article, and Amendment and also the historical context that prompted their inclusion in what some historians have called the world’s greatest document.

Chambers points out three Constitutional issues poised to trigger fiery debates and heated protests in the street as we move into the long hot summer ahead:

A large percentage of students on college campuses and others believe that hateful speech and the utterance of hurtful words deserve no protection under the 1st Amendment even in the face of recent Supreme Court rulings where in June 2017 the justices unanimously observed, Speech that demeans on the basis of race, ethnicity, gender, religion, age, disability, or any other similar ground is hateful; but the proudest boast of our free speech jurisprudence is that we protect the freedom to express the thought that we hate. Nevertheless, students continue to challenge Constitutionally-protected speech while claiming that being exposed to upsetting words and ideas justifies violent responses like rioting, arson, assault, and other attacks against the speaker. Students need to be taught by their professors that the solution to hate speech is not less speech; it’s more speech, says Chambers.

2.The 2nd Amendment vs Gun Restrictions

Because the framers knew that the right to bear arms would be the one right most viciously attacked and, if possible, taken away from citizens, the 2nd Amendment was drafted with a preamble to clarify its purpose: A well- regulated militia being necessary to the security of a free state. The Amendment ensures that America remains a free state through an armed and well-regulated militia. The Amendments purpose is not to ensure that citizens have guns for hunting. What types of weapons are protected by this Amendment? Weapons of the kind that would help the population maintain its freedom, which was won through bloody conflict during the Revolutionary War. As the memory of the war faded, scary weapons started to be banned to make citizens feel safer, even if that meant they were less secure.

In recent decades, the political differences between rural areas and metropolitan areas seem to have become more severe, causing political splits in certain parts of the nation. Federal law will almost always prevail when it interferes or conflicts with state law. However, there are many examples where tension between state and federal law remains unresolved. For instance, several states have legalized both the medical and recreational use of cannabis (marijuana), which is still a Schedule I controlled substance under federal law. Be ready for heated debates in Congress and protests in the street about State vs Federal legislative powers.

Understand how the Declaration of Independence, The Articles of Confederation and the Northwest Ordinance are still relevant and alive today.   Three of the Four Organic Laws of The United States of America

How are assault rifles and background checks resonating with Constitutional scholars

What a well regulated militia means in the Second Ammendment

We get our rights from God and the Constitution simply memorializes our rights, and doesn’t give us our rights.

What if some agency want to vaccinate you or your family..how does that work Constitutionally

We talk about Article One, Section Eight…”Let no state make anything but gold and silver a payment of debt…..”

Judicial relevance…rather than ruling on the the actual words written

Watch the film “in Search of Liberty” Here

John Chambers, an authority on The Constitution of The United States and current issues in our culture, April 3, 2018

'John Chambers – Author of The Constitution of the United States: A Study Guide – 3 Constitutional clashes about to divide the nation – April 3, 2018' have 2 comments