Author of Illuminati Unmasked: Everything you need to know about the “New World Order” and how we will beat it

Mr. Cirucci covers the following topics in his book and will discuss many of them on the show along with answering your questions, so send them in!

* Barack Obama’s shocking ties to this Mystery Religion—and it’s not Islam.
* How American politics have been rigged
and who has the power to control every level of your government.
* All of America’s external threats—illegal immigration, pandemics, terrorism—
orchestrated by the same people.
* Who was really behind 9/11 and how they have far worse planned.
* America’s top leaders from both Parties bow to this secret power.
* The worst days in America can all be traced back to them.
* American Patriots have been framed and murdered by them.
* Assassination is their specialty.
* Hidden history uncovered! The Communists and Nazis owe them their origins.
* “Another lone gunman” lie with a twist you’ve never heard: the real story behind Abraham Lincoln’s death.
* The chilling reality of “mind control”: LSD, satanism and the CIA…and who is behind it all.
* The death of the dollar and destruction of the Middle Class: all carefully planned.
* The “Alien Agenda”: a coming world deception completely controlled by them…—with help from another realm.
* Signs that a nation you never would suspect is secretly fighting the New World Order and proof that Resistance is Rising! 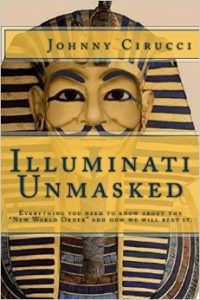 -Johnny tells us about his military background in Marines and Army; and of his eye-opening experience in Iraq deployment.

-Why were stable Muslim and Christian communities worse off after US military intervention?

-History of “The Illumined Ones”. Power of the Holy Roman Empire.

-The Gutenberg Press and the Protestant Reformation.

-Devout Roman Catholic elite US politicians. Vatican rules the world behind the scenes.

-Jesuits own and control many secular institutions, behind key assassinations.

-Tupper Saussy explains all in The Rulers of Evil.

-Compromised by Terry Kent Reed is a must read.

-Connections of Trump, Reagan, and other politicians to Jesuits. Example of Hegelian dialectic at work.

-Rothschilds are the accountants of the Vatican.

-US Presidential assassinations and attempts linked to control of money.

-War on the US middle class to put them back into feudalism by destroying buying power.

-What is the Jewish connection to the Jesuits?

-Jesuit education a screening process to determine usefulness of a candidate.

-Dee asks about UN Agenda 2030. Pushes at centralization are coming from Rome.

-Symbolism of Pope Francis speaking to US Congress.

-Flooding of immigrants into US to undermine national cohesiveness.

-CIA created ISIS. 9/11 an inside job. On 9/10, Rumsfield announced $2 trillion missing from military, then Accounting Dept. hit at Pentagon on 9/11. Women and homosexual push in military to destroy its effectiveness. Orders to stand down at Ben Ghazi. Osama bin Laden questions.

-Kevin asks why Johnny Cirucci is still alive. “They” control access and make him invisible.

-Technology not evil. The people that control technology are evil.

-“They” want to collapse world systems and make everyone turn to a single ruler, probably Jesuit.

-Emailer asks: How do Asian dynasties fit into this?

-Spirituality vs. Christianity belief of only way to God is through Jesus.

-Emailer: How can we be sure we haven’t been misled about the Bible? Jesuits fanatical about discrediting what was in the Bible.

-Emailer asks about Obama and how he become President. Fabricated puppet. Obama trained by a Jesuit priest in Chicago; his appointees have a Jesuit background.

-Why would Doug and Mel allow Trump in with his opposition to free trade? Trump is a controlled outlet to pacify angry electorate. The boys need a puppet to keep a real outsider out.

'Johnny Cirucci – Author of Illuminati Unmasked: Everything you need to know about the “New World Order” and how we will beat it – June 7, 2016' have 5 comments

Would you like reply to David King, Author of Hitler Out Of Time