Russell Bonner Bentley aka “Texas” is an American, who came to Donetsk in the middle of 2014 to join the military forces of Donetsk People’s Republic (DPR) in order to fight against fascism. Since January 2015 he has made several Youtube-reports from Donbass describing damages and murders of citizens of DPR conducted by Ukrainian neo-nazis and Ukrainian army. 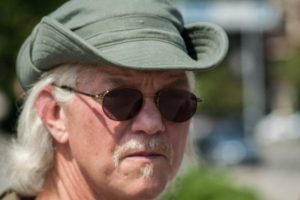 -“The boys” bought the infrastructure in former Russian countries. Installed a leader friendly to them they could control.

-Russian land mass is bigger than US and Canada combined, with half the US population. Has vast natural resources.

-25 million Russians killed in WWII. 80% of German combat was against Russians. WWII history is much more complicated than taught in the US.

-Resurgence of Naziism in Ukraine today. Installed leaders have a rabid hatred for ethnic Russians people living in the Ukraine.

-In spring 2014, US Asst Secretary of State Nuland said they spent $5 billion to destabilize Ukraine power structure; provoked a coup d’etat and installed neo-Nazi leaders they could control. Stepan Bandera is a Nazi war criminal. Maidan uprising against oligarchs.

-Gadaffi in Libya was a benevolent dictator. Overthrow by the US was a sham.

-The 1% want to rule the world and then reduce the population by ¾. Follow Nazi philosophy of master and slave.

-US, IMF, Japan, EU sending support to the controlled Ukrainian leaders. Want to make it an entirely Western controlled country, or at least to destabilize it like was done in Iraq, Libya, and Syria. Want to turn Donbass into a Somalia.

-Putin says his job as president is to protect the Russian people.

-Crimea and the Ukraine has historically been Russian. Huge percentage of population is ethnic Russian. Russian has had a military base in Crimea for hundreds of years, contracted with Ukraine to have Russian personnel there. Russia did not invade Crimea. No one killed in transition from Crimea to Russia. No Russian army in Donbass.

-Everything we’ve been told in the US about Crimea and the Ukraine is fake news.

-Natives of Odessa had a “Occupy Wallstreet” in 2014. 100 of them murdered in a massacre there by the neo-Nazis. Azov battalion using neo-Nazi symbolism.

-Russian federation military budget is a small fraction of the U.S budget.

-Donbass is the breadbasket of eastern Europe. Incredible natural resources. Can support themselves. Illegal to grow GMOs in Donbass and Russia.

-Operation Paperclip – thousands of Nazi war criminals imported to the US and Canada after WWII. No prosecution of them.

'Russell “Texas” Bentley – War, Politics, and Propaganda: The 1% Want to Rule the World and Reduce the Population by ¾. Following Nazi Philosophy of Master and Slave – March 7, 2017' have 2 comments