Romans 13: The True Meaning of Submission

Timothy Baldwin, an attorney and author joined us this morning to talk about our relationship with the government. Is it our duty to be quiet citizens and submit to tyranny? Mr. Baldwin has some very wise answers. Enjoy the show!

Many Christian pastors and leaders today are erroneously reviving the divine-right-of-kings argument used in the Dark Ages, which created some of the most horrific human affairs in history. They, like the grandfather of Communism Georg Hegel, argue that government is Divinely sanctioned to do anything it pleases and that God requires people to submit regardless of God’s standards of justice. This argument has been used by virtually every tyrant since Jesus, including Adolf Hitler.

These people are doing more to bring America and the rest of the world into slavery than perhaps any other thing. They are creating self-fulfilled prophecies of America’s destruction–all in the name of Romans chapter 13. This absurd interpretation of the Bible and Romans chapter 13 has not gone unchallenged.

Romans 13: The True Meaning of Submission shows with overwhelming evidence that submission to government is limited and that the obey-government-no-matter-what argument is false! It discusses sound rules of interpretation and construction, incorporates biblical reasoning, and uses hundreds of Scriptural proofs for its conclusions. 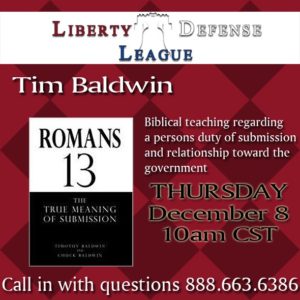