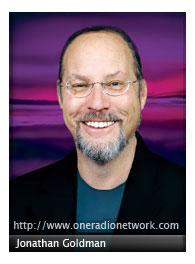 JONATHAN GOLDMAN, M.A. is an international authority on sound healing and a pioneer in the field of harmonics. He is author of HEALING SOUNDS, SHIFTING FREQUENCIES, THE LOST CHORD, the best selling THE 7 SECRETS OF SOUND HEALING, CHAKRA FREQUENCIES (co-authored with his wife Andi), and his latest THE DIVINE NAME, winner of the 2011 Visionary Award for “Best Alternative Health Book”.

Jonathan is director of the Sound Healers Association and president of Spirit Music, Inc. in Boulder, Colorado. A Grammy nominee, he has created numerous best selling, award winning recordings including “THE DIVINE NAME” (with Gregg Braden), “REIKI CHANTS”, “FREQUENCIES: Sounds of Healing”, THE LOST CHORD”, “2012: ASCENSION HARMONICS” and “CHAKRA CHANTS”, double winner of Visionary Awards for “Best Healing-Meditation Album” and “Album of the Year”. Jonathan is a lecturing member of the International Society for Music Medicine. He has dedicated his life to the path of service, helping awaken and empower others with the ability of sound to heal and transform.

In Spring 2011, Jonathan was named as one of Watkin’s Reviews “100 Most Spiritually Influential People on the Planet.” . In 2011, Jonathan was inducted into the Massage Therapy’s Hall of Fame. He presents HEALING SOUNDS lectures, workshops and seminars worldwide.