This article is copyrighted by GreenMedInfo LLC, 2016
No single herb threatens the pharmaceutical industry’s global monopoly as much as turmeric. Here’s why…Turmeric has received a lot of attention in the past few years. The reason has everything to do with the power of social media to undercut traditional pharmaceutical industry controlled media channels, along with the reality that the available published literature that has accumulated on turmeric’s health benefits is astoundingly vast. The open access database MEDLINE, for instance, now contains over 10,000 study abstracts on turmeric and/or its components, such as the polyphenol known as curcumin. Our intention at GreenMedInfo.com is to save you time looking through these thousands of studies by putting all the relevant ones to natural and integrative medicine in one spot. In the case of the burgeoning volume of turmeric and curcuminliterature, that spot is our Turmeric Research dashboard.

Previously, we wrote an article titled “600 Reasons Turmeric May Be The World’s Most Important Herb,” which received a quarter of a million social media shares and many more views. Since then, the Greenmedinfo database on turmeric has grown to encompass 800 distinct potential health benefits linked to this ancient Indian spice.This is all the more amazing when you consider the fact that most pharmaceutical drugs are marketed for one major health benefit, but come with about 75 known side effects. Take a look at our article showing curcuminas effective as 14 conventional pharmaceuticals.Clearly natural substances are superior to synthetic ones in this regard, and in a very real, embody physically a form of inter-kingdom compassion between plant and animal. And yet, you can not patentnatural substances, which precludes turmeric or any of its extracts from ever receiving FDA approval for the prevention or treatment of disease, even though it is capable of doing exactly this.

The purpose of this article is to help bring turmeric back into the forefront, and to introduce our newly refashioned and retooled Turmeric database to the world, which we hope will spread the truth about its powerful healing properties.We believe the user interface has been greatly improved, and we have created a set of features for members that will greatly increase the power of this research to move “evidence-based” natural medicine forward. We also encourage those who believe in our mission to support the continued growth of our Turmeric database, along with the 10,000+ other health topics on our website, by becoming a member. Or, lacking the resources to do so, to share it widely with others. This should help us to realize the three primary objectives of our mission:

1) To generate a greater awareness of Medline as the invaluable resource and much overlooked National Treasure that it is.

2) To contribute to the democratization of the information on Medline by acting as a liaison in its dissemination to the public.

3) To simplify the task of finding data relevant to alternative & complementary medicine.

So what are you waiting for? Take our Turmeric research dashboard for a spin, and go to the top of the page to use our search bar which gives you access to over 10,000 distinct health topics. 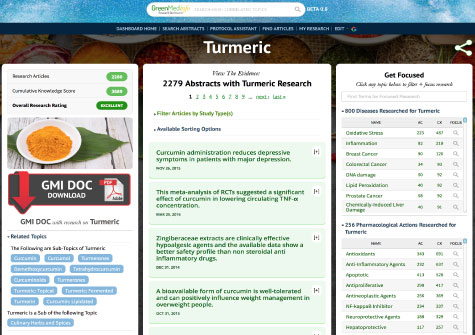 If you would like to support our ongoing database project and mission, or would just like to access the full force of powerful research features, learn about our membership option here.