Sitting for long periods is bad for you – this isn’t anything you probably don’t already know. But a leading cardiologists’ group warns that even if you exercise, spending too much time on your tush still takes a major toll on your heart. [1]

Let me be specific: you can’t just exercise a couple of times a week and expect to make up for 5 straight days of sitting, according to the American Heart Association (AHA) panel.

Just HowBig of a Problem is Sitting?

“Based on existing evidence, we found that U.S. adults are sedentary for about six to eight hours a day.”

She said that regardless of how much a person exercises, “prolonged sedentary time could negatively impact the health of your heart and blood vessels.”

However, that doesn’t mean you can’t be proactive when it comes to your health. It’s better than sitting around and crossing your fingers.

The Ramifications of Being Sedentary

Long road trips are notorious for causing potentially deadly blood clots, but you don’t have to be traveling to be at-risk. Sitting motionless for any period of time is just as dangerous.

A 2011 report found that inactivity caused 92,000 cancer cases a year. That same year, research from the American College of Cardiology found that sitting could be just asharmfulas smoking.

Inactivity has been linked to changes in both brain chemistry and structureand, yes, heart disease.

A lack of physical activity is one of the biggest contributors to obesity, which can lead to not just heart disease, but diabetes and other health problems. 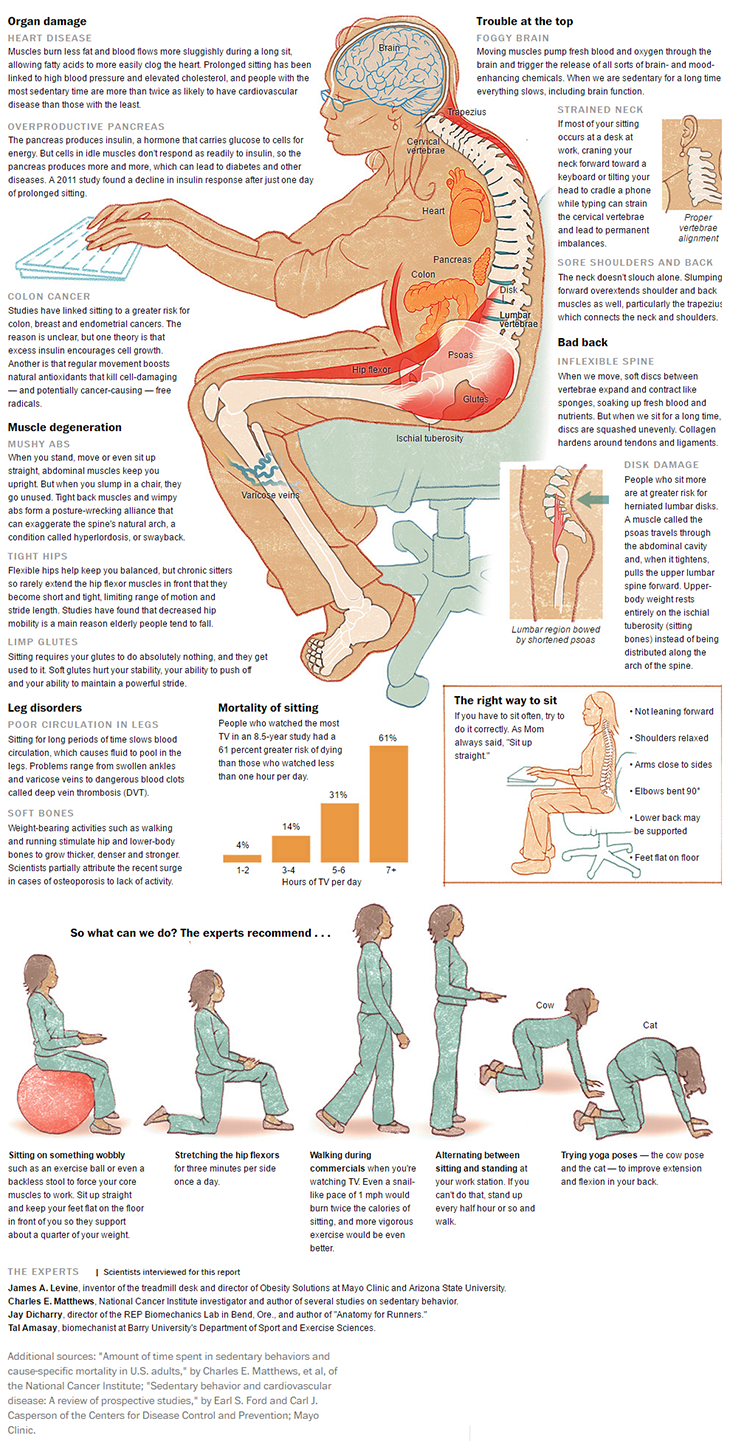 What Can I do toCut my Risk of Heart Disease if i Sit at a Desk All Day?

Dr. Barbara George,director of the Center for Cardiovascular Lifestyle Medicine at Winthrop-University Hospital in Mineola, New York, summed it up this way:

“All studies are indicating that moving more throughout the day — in addition to getting the recommended 30 minutes of moderate activity on a daily basis — is necessary to lower one’s risk of heart disease and other causes of mortality.”

“Like any muscle, if you don’t use it, you lose it.You need to exercise it. If you’re sitting around all day, it causes the blood vessels not to work well, they don’t pump blood and they don’t circulate oxygen.”

OK, so just going for a run on Mondays and Fridays isn’t enough. You have to keep moving throughout the day, every day. That means a minimum of 30 minutes of moderate exercise, not just a leisurely stroll around the living room.

A recent Norwegian study found that it would take 60-75 minutes of moderate daily exercise to make up for sitting most of the day.

The more you can do, the better.

If, like me, your derriere has to be planted firmly in 1 spot at work, it’s a good idea to get up and move around every hour or so.

It’s hard to be more specific than that because, according to Young:

“We don’t have information about sedentary behavior is bad for health – the best advice at this time is to ‘sit less and move more.’” [3]