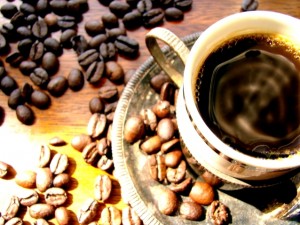 Coffee is known to have anti-cancer properties as researchers have found that coffee drinkers are typically 50% less likely to get specific cancers than nondrinkers. Several studies have found ties to lower rates of breast and rectal cancers. A large-scale cohort study of nearly 1,000 cancer patients has shown coffee prevents the recurrence of colon cancer.

From fighting free radicals, to improving memory, diabetes, parkinsons, and even reducing cancer risk, there are plenty of studies touting the health benefits of coffee.

Like all plant foods, coffee (derived from a bean) contains many naturally occurring chemicals and many are potentially healthful. As in tea, many of the beneficial substances are antioxidants, which help protect against cell-damaging free radicals, and thus may reduce the risk of heart disease and cancer. In fact, coffee is the No.1 source of antioxidants in the U.S., largely because Americans drink so much of it instead of other foods.

Caffeic acid is found in coffee, as its name might suggest, however it is chemically unrelated to caffeine and shares none of its stimulant actions in the body. It is a member of a large class of chemicals found in coffee called phenols. Many of these phenols, such as caffeic acid, exhibit modest, dose-dependent anti-oxidant and anti-carcinogenic properties.

Ferulic acid is also an antioxidant which neutralizes free radicals and may prevent oxidative damage to our bodies. The acid is also a potent anti-inflammatory that is capable of significantly reducing brain inflammation.

Study
Writing in the Journal of Clinical Oncology, the team behind the study revealed data that suggests participants consuming four or more cups of coffee a day (equivalent to around 460 milligrams of caffeine), were 42% less likely to have their cancer return than non-coffee drinkers, and were 33% less likely to die from cancer or any other cause during the study follow up period.

“We found that coffee drinkers had a lower risk of the cancer coming back and a significantly greater survival and chance of a cure,” said lead author Dr Charles Fuchs — who is director of the Gastrointestinal Cancer Center at the Dana-Farber Cancer Institute.

However, Fuchs warned that as encouraging as the results appear to be, he is hesitant to recommend patients start drinking coffee until the results are confirmed in other studies.

Previous observational studies have suggested that colon cancer recurrence may be increased in people with relatively high levels of insulin (hyperinsulinemia), and that certain lifestyles including sedentary lifestyle, obesity, and increased dietary glycaemic load may be associated with an increased risk.

Since research has suggested that insulin sensitivity, and signs of diabetes and metabolic syndrome can increase colon cancer risk, and that caffeine intake may be associated with decreased risk of type 2 diabetes and improved insulin sensitivity, the team decided to investigate the effects of caffeine consumption on colon cancer recurrence and survival.

Fuchs said the study is the first to study an association between caffeinated coffee and risk of colon cancer recurrence. It adds to a number of recent studies suggesting that coffee may have protective effects against the development of several kinds of cancer, including reduced risks of postmenopausal breast cancer, melanoma, liver cancer, advanced prostate cancer.

The team analysed dietary data from 953 patients with stage III colon cancer, who filled out dietary pattern questionnaires early in the study, during chemotherapy and again about a year later.

The patients were found to have the greatest benefit from four or more cups of coffee a day, while two to three cups of coffee daily had a more modest benefit. Little protection was associated with one cup or less, reported the researchers.

In analysing the results of the new study, Fuchs and his colleagues discovered that the lowered risk of cancer recurrence and deaths was entirely due to caffeine, and not other components of coffee.

“The association of total coffee intake with improved outcomes seemed consistent across other predictors of cancer recurrence and mortality,” said the team.

It’s not clear why caffeine has this effect and the question needs further study, commented Fuchs — adding that one suggestion is that caffeine consumption increases the body’s sensitivity to insulin, so less of it is needed, which in turn may help reduce inflammation – a risk factor for diabetes and cancer.

John Summerly is a nutritionist, herbologist, and homeopathic practitioner. He is a leader in the natural health community and consults athletes, executives and most of all parents of children on the benefits of complementary therapies for health and prevention.