THE MORNING SHOW
with
PATRICK TIMPONE

Dr. Wilson says time release T3 will reset your thyroid and work well without the supplemental help. May want your doc to hear this.

In addition, there are people who seem much more prone to developing Wilsons Temperature Syndrome than others. Their symptoms tend to:

Those who seem most prone to developing Wilson’s Temperature Syndrome are those whose ancestors survived famine, such as Irish, Scot, Welsh, American Indian, Russian, etc.. Most susceptible of all seem to be those who are part Irish, and part American Indian. But under severe circumstances people of any nationality can develop Wilson’s Temperature Syndrome.

About 80% of Wilson’s Temperature Syndrome sufferers are women. 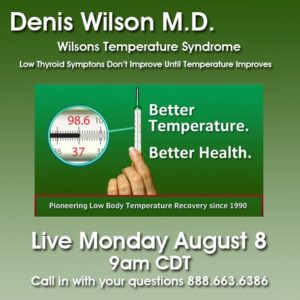 Denis Wilson, MD specializes in examining the link between basal body temperature and peripheral thyroid function. For over twenty years he has educated physicians about the use of sustained release liothyronine for patients with symptoms of low thyroid and low body temperature but who have normal blood tests.