It’s interviews like these on subjects like this that, we feel here at One Radio Network, are some of the most important to listen to, learn about, and pass around. Dr. Judy Carman and Howard Vlieger team up on this one to talk about the study of which the above article speaks.

This ground-breaking study, published June 12, 2013, shows that animals are harmed by the consumption of feed containing genetically modified (GM) crops.

The research was undertaken because farmers have for some years been reporting reproductive and digestive problems in pigs fed on a diet containing GM soy and corn. Farmers have seen a reduced ability to conceive and higher rates of miscarriage in piggeries where sows have been fed on a GM diet, and a reduction in the number of piglets born if boars were used for conception rather than artificial insemination. There is also evidence of a higher rates of intestinal problems in pigs fed a GM diet, including inflammation of the stomach and small intestine, stomach ulcers, a thinning of intestinal walls and an increase in haemorrhagic bowel disease, where a pig can rapidly “bleed-out” from its bowel and die. 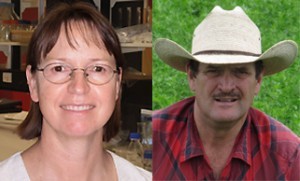 In 1998, Howard Vlieger harvested both natural corn and a

genetically modified Bt variety on his farm in Maurice, Iowa.

Curious about how his cows would react to the pesticide-

producing Bt corn, he filled one side of his sixteen-foot trough with the Bt and dumped natural corn on the other side. Normally, his cows would eat as much corn as was available, never leaving leftovers. But when he let twenty-five of them into the pen, they all congregated on the side of the trough with the natural corn. When it was gone, they nibbled a bit on the Bt, but quickly

changed their minds and walked away.

A couple of years later, Vlieger joined a room full of farmers in Ames, Iowa to hear presidential candidate Al Gore. Troubled by Gore’s unquestioning acceptance of GM foods, Vlieger asked Gore to support a recently introduced bill in Congress requiring that GM foods be labeled. Gore replied that scientists said there is no difference between GM and non-GM foods. Vlieger said he respectfully disagreed and described how his cows refused to eat

the GM corn. He added, “My cows are smarter than those scientists were.” The room erupted in applause. Gore asked if any other farmers noticed a difference in the way their animals responded to GM food. About twelve to fifteen hands went up.