Every year on July 4th we celebrate our “independence”, but is America really free? How could we possibly be free when “Big Brother” is constantly intruding in our lives in hundreds of different ways? And I am not just talking aboutNSA snooping. Sadly, the truth is that the United States is beginning to fully embrace a “police state” culture. We have learned that the government monitors and keeps a record of all of our cell phone calls, emails, Internet searches,credit card transactions, and every piece of mail that we send.

But most Americans don’t seem to care. We are “encouraged” to report the “suspicious activity” of our neighbors to the authorities, we are told that having security thugs touch the private areas of our women and children at our airports is necessary “for our security”, and80,000 SWAT team raidsare conducted each year in the United States. But the American people don’t seem to care. America was once a great country, but now it is being turned into a giant prison, and only a small minority of the citizens are raising their voices in objection.

When I was a child, I was taught that totalitarian societies such as North Korea, the Soviet Union and Nazi Germany were the bad guys.

So why in the world would we want to become more like them?

Do we actually believe that these ridiculous security measures are keeping us safer?

At this point, we have already given up so much privacy that we barely have any left.

For example, up until recently I actually believed that our mail was private. But now we have learned that the government is monitoring every piece of mail that the American people send. And accordingto the New York Times, the government has flagged the mail of thousands of problem citizens for special attention…

Leslie James Pickering noticed something odd in his mail last September: a handwritten card, apparently delivered by mistake, with instructions for postal workers to pay special attention to the letters and packages sent to his home.

“Show all mail to supv” — supervisor — “for copying prior to going out on the street,” read the card. It included Mr. Pickering’s name, address and the type of mail that needed to be monitored. The word “confidential” was highlighted in green.

But even if you are not on the list of those that get special attention, your mail is still photographed. In fact,160 billionphotographs of our mail were sent to the government last year…

Mr. Pickering was targeted by a longtime surveillance system called mail covers, a forerunner of a vastly more expansive effort, the Mail Isolation Control and Tracking program, in which Postal Service computers photograph the exterior of every piece of paper mail that is processed in the United States — about 160 billion pieces last year. It is not known how long the government saves the images.

Together, the two programs show that postal mail is subject to the same kind of scrutiny that the National Security Agency has given to telephone calls and e-mail.

The tyrants of the past never dreamed of having some of the technologies that we have today. Virtually everything that we do is watched, monitored, tracked or recorded in some way.

And as technology continues to advance, there will be very little that the authorities will not be capable of.

Some of the technologies that are coming out these days are absolutely frightening. For example, over in Europe one company is now running talking ads that seem like they are coming frominside our own heads…

Passengers leaning their head against the window will “hear” adverts “coming from inside the user’s head”, urging them to download the Sky Go app.

The proposal involves using bone conduction technology, which is used in hearing aids, headphones and Google’s Glass headset, to pass sound to the inner ear via vibrations through the skull.

A video for the Talking Window campaign released by Sky Deutschland and ad agency BBDO Germany states: “Tired commuters often rest their heads against windows. Suddenly a voice inside their head is talking to them. No one else can hear this message.”

How would you respond if a “voice inside your head” suddenly started talking to you?

In other instances, “Big Brother” can intrude in our lives in more old-fashioned ways.

For example, just check out the rules for July 4th that were posted at the entrance to one park in Lakewood, Ohio. This photo comes from a recent articleby Paul Joseph Watson… 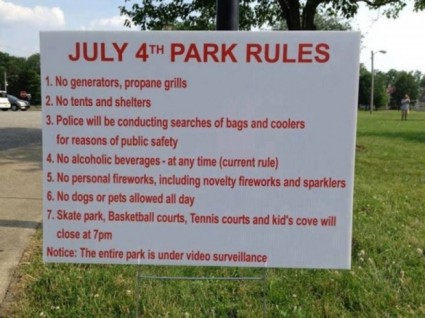 Why would anyone want to go spend the 4th of July at that park?

But this is what America is turning into. We are turning into a society that is absolutely obsessed with security and control, and this is manifesting in hundreds upon hundreds of different ways. If you doubt this, just check out the following articles…

-“21 Facts About NSA Snooping That Every American Should Know”

-“America Is Being Systematically Transformed Into A Totalitarian Society”

-“America Is Embracing The Secret Police Culture Of The Nazis”

Fortunately, the recent revelations about the NSA have spurred some Americans into action. For example, a new non-partisan organization known as “Restore The Fourth” is calling on the U.S. government to restore our Fourth Amendment rights. The following is from apress releasethat the organization recently issued…

Restore the Fourth is a grassroots, non-partisan, non-violent movement that seeks to organize and assemble nationwide protests on July 4th, 2013. Protesters in over 100 cities across America will gather to demand that the government of the United States of America adhere to its constitutionally dictated limits and respect the Fourth Amendment. http://www.RestoretheFourth.net provides a detailed list of protest locations.

Restore the Fourth maintains that justification of the Fourth Amendment beyond the original text need not be given; the legitimacy of which is self-evident. “The right of the people to be secure in their persons, houses, papers, and effects, against unreasonable searches and seizures, shall not be violated, and no Warrants shall issue, but upon probable cause, supported by Oath or affirmation, and particularly describing the place to be searched, and the persons or things to be seized.” The Fourth Amendment of the Bill of Rights clearly protects all citizens’ assets, both digital and physical, against searches and seizures without warrant; they aim to assert those rights. They insist that the proper channels of government work to ensure that all policy complies with the supreme laws of the United States of America in their entirety.

Restore the Fourth requests that American citizens’ right to privacy is respected and stands with the Electronic Frontier Foundation and StopWatching.us on their open letter to Congress. As informed members of the American electorate, they endorse and echo the letter’s demands.

1.Enact reform this Congress to Section 215 of the USA PATRIOT Act, the state secrets privilege, and the FISA Amendments Act to make clear that blanket surveillance of the Internet activity and phone records of any person residing in the U.S. is prohibited by law and that violations can be reviewed in adversarial proceedings before a public court;

2. Create a special committee to investigate, report, and reveal to the public the extent of this domestic spying. This committee should create specific recommendations for legal and regulatory reform to end unconstitutional surveillance;

3.Hold accountable those public officials who are found to be responsible for this unconstitutional surveillance.

Restore the Fourth aims to ensure that the will of the people is reflected in the government of the United States of America. This movement intends to bring an end to twelve years of Fourth Amendment abuses, and demonstrate the need for a return to the Constitution. All Americans should stand with them in this cause to protect the Fourth Amendment of the United States Constitution.

I would encourage you to speak out about these issues however you can. For some people, that may mean participating in a street protest. For others, it may mean making a great YouTube video.
Others spread the word on radio shows or by speaking with their friends. Personally, I have written about these issues extensively on my websites and in my new book. We all have ways that we can object to the fact that America is being systematically transformed into a giant prison.
So what do you think?

Do you believe that America is really free?

'Are We Really Free When Big Brother Is Systematically Turning America Into A Giant Prison?' has 1 comment