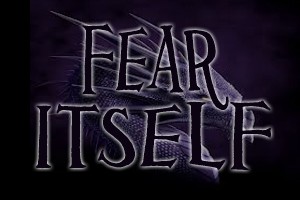 If we were to pinpoint the one pervasive emotion in society today, it would be fear. People all around you are fearful of almost everything. They fear the police. They fear the IRS, ATF, TSA and all the other “alphabet police”. They fear losing their job. They fear loosing their house. They fear their city or town government. And they fear the mother of them all – fear of continuing life without enough money to maintain their current lifestyle (or at least the one they remember from a decade ago). Most people rationalize these fears as normal because “everyone has them”.

We are trained from a very early age to act out of fear. We fear our teachers wrath, so we do our homework. We fear clergymen, for they decide if we go to heaven or hell, so we say all the right prayers. We fear older children who may bully us so we cross the street to avoid them. Later on in life we fear the cost and hassle of a ticket, so we fasten our seatbelts. We fear losing our house so we work in a job that means nothing, offers us no personal satisfaction other than just enough money to keep us trying to reach the carrot on the stick.

Try this experiment… list all your obligations for the next 30 days – work, social and financial – then place a star beside those that cause you any concern (fear). Most people who do this discover there are multiple things in their immediate lives that cause them fear.

Today, in 2012, there is plenty outside of our daily lives to fear: Will the world end on December 21st? Will WWIII start in Iran? Will the economy collapse? Will the poles shift position? Will the sun (or another country) send an EMP that knocks out the electrical grid? Will martial law be implemented? Have we foolishly given the President of the United States so much power that he can become a dictator? Will food supplies run out? Will the weather continue to be abnormal? Will chemtrails ultimately poison us? Will GMO crops take over all others?

Are you scared yet?

Many of these fears are constantly and purposely reinforced by what I like to call “the pop culture”. Television is the greatest purveyor of fear, usually by embedding feelings of inadequacy. I recently read that the average American watches 34 hours and 39 minutes of TV per week. That’s a good deal more than it would take to participate in a college course. Like the college course, you are being instructed and trained by the TV. Edward Bernaise coined the term “television programming” and his rationale was crystal clear – television was designed to program people into becoming happy consumers. These happy consumers are being motivated to purchase garbage by an external force that exploits feelings of inadequacy. Every time we watch a commercial that shows the handsome man with a real “babe” sitting next to him in his shiny new car, in our minds we feel inadequate for not having a new car, too. These feelings of inadequacy open the door to fear, especially when we are given nothing of real value to replace those desires.

Fear is the toolbox of “the powers that be” (TPTB). Fear is the lowest vibration humans can be affected by or give off. It impedes our path to higher (vibratory) levels of consciousness and ascension as human beings. People who live in a constant state of fear are very manipulatable. TPTB understand that if they can make people fearful, they can make them do anything.

It is fear – manipulated fear – that makes us compliantly stand in line to be groped before embarking on a plane, regardless of the fact that no terrorist plot has ever been discovered nor stopped by such action! Although some who suffer through the TSA’s groping express anger, the real motivation for compliance is fear.

The manipulators, TPTB, are fostering fear of everything. The intensification of this fear began as a full-frontal assault in the days immediately after 9-11. It was fear that caused Americans to lay down – not once, not twice, but 3 times – and approve and abide by the Patriot Act and now NDAA. It was fear, not patriotism that caused many of us to cheer the invasions of Afghanistan and Iraq. It is manipulated fear that allows a once free society to accept such a campaign such as “see something/say something” – fear your neighbors, fear those who think the Constitution was a pretty good document before it was overruled by executive orders, fear those who are not dependent on “the system” for their lives, fear those who have a different opinion than you do. It is fear that keeps us from opening our mouths and saying “No” to those actions that we know are not right.

TPTB know this music very well and play it long and hard for all it’s worth. They are congratulating themselves, patting each other on the back for causing 350 million people to be so fearful that they consistently act against their own self-interest – and against the last vestiges of freedom. Their jubilation is caused by knowing that 99.9% of you are easily controllable and predictable. Hitler’s “final solution” required countless numbers of troops, gestapo and SS to carry it out. Today it is done with a TV ad campaign, shown in the aisles of Wal-Mart. Today TPTB brag that most will walk into what they know is their execution without even having to be told the lie that they are going being de-loused.

How do we overcome this fear that has been instilled in us? When I was a child and afraid of lightening and thunder, my mother go out the encyclopedia and we read about thunderstorms, about how the lightening was 1 mile away for every 5 second delay before hearing the thunder. I was never afraid of a thunder storm again.

Look at the reality of that which you fear. Do we need to fear Al-qaeda because of 9-11 to the point of fearing any Muslim person? It wasn’t they who planned it out, they were simply to stooges used to perpetrate an evil action against 3000 innocent Americans, which action was at its essence an excuse to take Americans’ freedoms away. There has been no secondary attack in the 11 years since that horrific event. If they wanted to destroy us, wouldn’t they attack when we were still reeling from the first one?

Do we need to fear a neighbor who might be having an exercised conversation on his cellphone in a Wal-Mart to the point of calling in a SWAT team? Not if we take the time to take a walk passed our own house to our neighbor’s to introduce ourselves and thereby learn who he or she is.

Do we need to fear an 83 year old grandmother taking her final flight to see her grandchildren to the point of humiliating her before allowing her on a plane? Or a 4 year old child screaming in terror? Or a business executive? Or YOU – what do they have to fear from you that they need to grab your genitals as you run the gauntlet of TSA “agents”, wherever they set up shop?

The truth is, they do fear you. They fear that too many of us are waking up, thinking for ourselves and replacing that fear with self-determination. TPTB fear anyone who claims their own birthright to live the life they choose that does not harm another, without fear. They need you to fear them, or their plans won’t work. You can’t control 6 billion people with a whip, but you can control them with fear. It has worked since the days of Nimrod, who convinced his people to store all their grain in his grain bin to keep it safe from imagined attackers “lurking” outside the city walls.

Shed the fear. Be kind to each other. Help each other. Love each other. These actions leave less and less room for fear to take hold of you. If this is a new concept for you, start small. Start with your family, expand it to your co-workers, and then to people you don’t even know. Once you feel how good it is to not live in fear, it may become a habit. And wouldn’t that foil their plans?

TERRAIN: A film by Andrew Kaufman M.D. and Marcelina Cravat