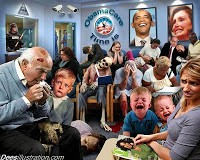 Obamacare’s health exchanges opened on October 1. Hopefully you weren’t one of the unlucky guinea pigs who attempted to sign up with a system so crummy that even theWashington Postis calling it a disaster.

Given that the impact of Obamacare will only grow from here on out, Casey Research asked acclaimed Obamacare expert Dr. Lee Vliet what we should expect as the calendar turns to 2014.

Importantly, Dr. Vliet is independent in every sense of the word. Not only is she an independent physician, she’s also a registered political Independent, and has no ties to pharmaceutical, insurance, political, or any other interests. Like any good doctor, she is professionally concerned with one thing and one thing only: her patients. You’ll find her criticisms of Obamacare quite harsh, but only because she’s disturbed about the impact it will have on her patients.

Dr Vliet:It’s been clear to anyone paying attention that the October “rollout” of Obamacare has been a turbulent, confusing disaster. Sloppy IT systems and technological failures combined to cripple Obamacare’s sign-up systems. Security flaws put Americans at risk for identity theft.

In an almost comical understatement, President Obama summarized these massive failures as “a few glitches.” I think that Luke Chung, IT expert and president of database solutions firm FMS, explained the situation much more accurately:

What should clearly be an enterprise quality, highly scalablesoftware application felt like it wouldn’t pass a basic code review. It appears the people who built the site don’t know what they’re doing, never used it and didn’t test it.

Chung went on to call it a “technological disaster.”

Think about what this ineptitude means in the bigger debate about Obamacare. The administration spent 3½ years and $698 million of taxpayers’ money to develop this software. They’ve known since earlier this year that the system wasn’t ready to support the rollout of the exchanges. Yet they proceeded anyway, apparently unconcerned about their faulty software costing Americans millions of hours of frustration and lost productivity.

These same bureaucrats continue to assume more and more control of our medical care. What does their incompetence say about how they will handle making life-or-death medical care decisions?
Like a parasite taking over its host, Obamacare will commandeer almost 20% of our economy, crowding out private options. With 2014 fast approaching, what should we expect in its next phase?

1. The expansion of Medicaid, with increased cost burden for taxpayers.

Medicaid is a combined state-federal program initially designed to help the neediest among us. But it has burgeoned to cover medical costs for about one in every five people. Today, Medicaid pays for two of every five babies born in the United States, and three of every five people in long-term care facilities in the US.

Obamacare will add another20 millionnew Medicaid dependents. According to the Kasier Family Foundation, that Medicaid expansion will add an average of 13% to state budgets in costs for 2014 alone.

Even though Medicaid was designed to help the poor, studies have consistently shown that Medicaid recipients receive worse medical care than people withoutanyhealth insurance at all! Medicaid patients have longer waits to see a doctor, fewer specialists to choose from, and poorer medical outcomes overall. A particularly morbid piece of evidence is that on average, Medicaid patients die sooner after surgery than people who have no medical insurance.

The majority of Americans, especially those who are young and healthy and therefore have paid low premiums in the past, are seeing their health insurance premiums rise between 50% and 150%. Further, employers are cutting full-time workers back to part-time by reducing employees’ hours per week from 40 to 29 or less, to avoid having to provide those employees with expensive, Obamacare-compliant coverage.

The “Affordable Care Act” has become anythingbutaffordable for most people.

Obamacare expands the requirements for what all health insurance policies must cover. So it’s no mystery why premiums have risen: Americans now must pay for a host of features, whether they want to or not. For example, in my office, the women employees are all menopausal. Yet Obamacare requires our small-business health insurance policy to cover pregnancy and maternity care! That means our policy costs more.

Unfortunately, some businesses will be forced into the worst option of all: going out of business.

4. The employer-based health insurance policies that remain will have higher out-of-pocket costs for employees.

Because businesses must pay more to purchase Obamacare-compliant plans, they will require employees to pay higher co-pays and deductibles before coverage begins.

5. Fewer types of health insurance policies can be offered under Obamacare.

Candidate and then President Obama promised, “You can keep your insurance plan.” Nope.

6. Many people cannot keep their doctors.

Candidate Obama promised, “If you like your doctor, you can keep your doctor.” But many patients who like their doctors are being forced to find new ones due to changes in physician networks, as well as doctors leaving insurance plans to start fee-for-service or “concierge” practices.

Sadly, when a patient is pushed out of a long-standing relationship with a physician who understands their medical history, medical outcomes often deteriorate. This is especially true for special-needs patients, who often fall between the cracks when doctors are pressured to see 40 or 50 patients a day in five-minute visits.

8. Loss of ownership of your medical records.

Your doctors, hospitals, and other health professionals are being pressured to adopt electronic medical record systems and send patient information to the federal government’s medical database by 2015. If they don’t comply, they’ll be penalized with reduced payments for services.

This means the government will own your personal, private information, and you have no say in the matter. I consider this a complete loss of your privacy, as well as a violation of the Constitution’s 5thAmendment “Takings” clause.

9. More waivers and exemptions for the political elites and Democrat cronies.

The Obama Administration and its political appointee, HHS Secretary Sibelius, have granted over 1,000 waivers and special exemptions to various Democrat donors, political allies, unions, and others. Obama’s politically connected friends are the only Americans who won’t suffer under Obamacare’s onerous regulations, ballooning costs, and 20 new taxes.

10. On January 1, 2014, the Individual Mandate to purchase Obamacare-compliant health insurance goes into effect.

“Mandate” may sound benign, but it carries the force of law. Those who do not comply face another Obamacaretax(as the Supreme Court defined it), though called a “penalty” by Democrats when they forced the healthcare law through Congress on a partisan vote.

At the end of the day, Obamacare shifts a bigger burden onto taxpayers and increases the number of people on the dole. In other words, it pushes the US in the exact opposite direction it needs to go to solve its massive debt problems.

The most serious problems of Obamacare, however, will be felt at the individual level. You’re going to wait longer to see a doctor, you’re going to pay more for fewer treatment options, and healthcare quality will deteriorate as doctors and hospitals go out of business.

Obamacare seeks to replace the adaptability and efficiency of our free markets with heavy-handed government control and micromanaging by bureaucrats who don’t have a clue about what really helps patients. We need the opposite:patient-centered, free-marketreforms.

Such programs have been successfully implemented in states like Indiana and businesses like Whole Foods and Safeway. They used health savings accounts and other incentives to empower consumers to make their own medical spending decisions.

It’s possible to reform and improve the broken payment system while keeping our excellent medical care and innovative atmosphere that relieves suffering and improves quality of life. Unfortunately, Obamacare is pushing our country in the wrong direction.

Dr. Vliet writes as an independent practicing physician with medical practices in Tucson and Dallas focused on issues of endocrine aging in men and women from puberty to late life. Dr. Vliet is a registered political Independent, and is also medically independent of all health insurance contracts since 1986. Her allegiance is to and for patients. Dr. Vliet is the 2007 Voice of Women Honoree by the Arizona Foundation for Women for her pioneering work on the overlooked hormone connections in women’s health, and she is the author of six consumer books on health topics. She has appeared on nationally syndicated radio and TV shows discussing the healthcare law as well as a variety of health topics for women and men.

Dr. Vliet was one of the speakers at the just-concluded 2013 Casey Research Summit. (Click hereto pre-order the complete Summit Audio Collection and save $100 off the normal price. This discount offer ends tomorrow.)

'Ten Things to Expect from Obamacare in 2014' has no comments