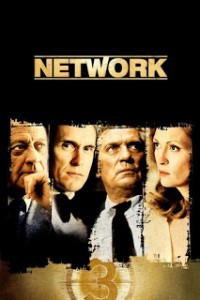 “You have meddled with the primal forces of nature, Mr. Beale, and I won’t have it!! Is that clear?!… You are an old man who thinks in terms of nations and peoples. There are no nations. There are no peoples. There are no Russians. There are no Arabs. There are no third worlds. There is no West. There is only one holistic system of systems, one vast and immane, interwoven, interacting, multivariate, multinational dominion of dollars. Petro-dollars, electro-dollars, multi-dollars, reichmarks, rins, rubles, pounds, and shekels. It is the international system of currency which determines the totality of life on this planet. That is the natural order of things today. That is the atomic and subatomic and galactic structure of things today! And YOU have meddled with the primal forces of nature, and YOU WILL ATONE!” (Arthur Jensen, to Howard Beale, Network, 1976)

In the brilliant 1976 film, Network, written by Paddy Chayefsky, the programming head of a giant television network, Diana Christensen, shifts the whole news department over to the entertainment division.

Thus emerge new shows with galloping ratings: Howard Beale, Prophet of the Air Waves; The Mao Tse-Tung Hour, in which a guerrilla group films itself carrying out armed bank robberies; and Sybil the Soothsayer, a Tarot reader.

There is no longer even a pretense of a need for news anchors to appear authoritative, objective, or rational.

Diana Christensen is unstoppable. She sees, with burning clarity, that audiences are bored to the point of exhaustion; they now require, as at the end of the Roman Empire, extreme entertainment. They want more crime, more violence, more insanity, out in the open. On television.
In promoting her kind of news division, she tells network executives:

“Look, we’ve got a bunch of
hobgoblin radicals called the
Ecumenical Liberation Army who
go around taking home movies
of themselves robbing banks.
Maybe they’ll take movies of
themselves kidnapping heiresses,
hijacking 747’s, bombing bridges,
assassinating ambassadors.
We’d open each week’s segment
with that authentic footage,
hire a couple of writers to
write some story behind that
footage, and we’ve got
ourselves a series…

“Did you see the overnights on the
Network News? It has an 8 in New
York and a 9 in L.A. and a 27 share
in both cities. Last night, Howard
Beale went on the air [as a newscaster] and yelled
bullshit for two minutes, and I
can tell you right now that tonight’s
show will get a 30 share at least.
I think we’ve lucked into something…

“I see Howard Beale as a latter-day
prophet, a magnificent messianic
figure, inveighing against the
hypocrisies of our times, a strip
Savonarola, Monday through Friday.
I tell you, Frank, that could just
go through the roof…Do you want to figure out
the revenues of a strip show that
sells for a hundred thousand bucks
a minute? One show like that could
pull this whole network right out
of the hole! Now, Frank, it’s being
handed to us on a plate; let’s not
blow it!”

Television in the “real world” isn’t all the way there yet, but it’s getting there.

In Network, Diana Christensen personifies the news. She is the electric, thrill-seeking, non-stop force that is terrified of silence.

She is walking talking hyperactivity. Sudden shifts. Her affairs with men are brief and inconsequential. She moves on.

She lives and feeds on adrenaline. So does the viewing public. Overnight TV-show ratings reflect that fact.

Nothing else ultimately matters. Ratings are the top line and the bottom line. The individual and his thoughts are completely irrelevant.

Since television is the arch mass-medium, the mass reaction is calculated according to lowest common denominator, and by that standard the most extreme shows are courted.

Shock, violence, crime. Howard Beale, unhinged, a news man screaming about the insanity of the news, is perfectly acceptable, because the audience is simply responding to Beale’s inchoate outrage and their own. Nothing deeper is needed. What could have resulted in a true rebellion is short-circuited. Beale becomes a crazy loon, a novelty item. Yet one more distraction.

When, in a brief interlude of clarity, he begins telling his audience about the takeover of society by mega-corporations, his show droops. Ratings collapse. Diana is no longer interested in him; she wants to sack him.

However, Arthur Jensen, the head of the corporation that owns the television network wants to keep Beale on the air, as a messenger of the “galactic truth” about the beneficial integration of all human activity under the rubric of global money and global power. He converts Beale to his cause.

Diana sees only one way out of this ratings disaster: kill Beale; on air; during his show. And so it is done.

Network also shows us the audience becoming actor, player, participant. The audience is jumping out of its skin to be recognized, courted, adored as a mighty rolling force embodying no particular meaning.

Diana knows it, and she is more than willing to accommodate this frantic desire, if only her bosses will let her go all the way. She sees the journey from anonymity to fame can be achieved in a matter of minutes. She can arrange it.

The parallels between Network and the current state of mass/electronic media are numerous. Most importantly, the governments of “advanced” countries realize they can cement their control by dealing with their populations as groups.

In this sense, governments are media companies. They give coverage. They give access. They grant popularity. They do this with full knowledge that they are staging charades. Authentic power will never be on the table—only the appearance, not the real thing.

This is how mass-media operate. They give fluff and sugar, which soon melt and vanish. It’s a magic trick.

Layers and layers of promise and distraction. Here one minute, gone the next.

The people, momentarily assuaged and victorious, are left holding the bag.

On to the next story, next show, next audience-rating report.

“Poetry and the arts can’t exist in America. Mere exposure to the arts does nothing for a mentality which is incorrigibly dialectical… The young today cannot follow narrative but they are alert to drama. They cannot bear description but they love landscape and action… Ads represent the main channel of intellectual and artistic effort in the modern world… After childhood, the senses specialize via the channels of dominant technologies and social weaponries.” (Marshall McLuhan)

Modern media are not only the landscape, they are shaping how reality is perceived. Generations of people are now prepared to believe that all events lead to new chapters of a drama without any conceptual reference whatsoever.

This is why people are more and more determined to get their news from video rather than the written word. They feel they are watching a show. The show will continue. There is no need to stop and consider what the show means.

The show will “explain” itself eventually, as any story does. This is the new meaning of the term “dialectical”: a process by which the story adds detail and more detail and arrives at a payoff.

Viewing the payoff frees the audience from having to remember the whole story. The story is just another experience, heightened by the fact that tensions and conflicts are portrayed and then somehow “resolved.”

Having that experience is also the new meaning of “knowledge.”

This is the century of osmosis.

Osmosis is an exchange between programmed entities. In this case, we are talking about an exchange/embrace between the human mind and invented external reality—and that is the starting point of the Matrix.

The author of three explosive collections, THE MATRIX REVEALED, EXIT FROM THE MATRIX, and POWER OUTSIDE THE MATRIX, Jon was a candidate for a US Congressional seat in the 29th District of California. He maintains a consulting practice for private clients, the purpose of which is the expansion of personal creative power. Nominated for a Pulitzer Prize, he has worked as an investigative reporter for 30 years, writing articles on politics, medicine, and health for CBS Healthwatch, LA Weekly, Spin Magazine, Stern, and other newspapers and magazines in the US and Europe. Jon has delivered lectures and seminars on global politics, health, logic, and creative power to audiences around the world. You can sign up for his free emails at NoMoreFakeNews.com or OutsideTheRealityMachine.

This article may be re-posted in full with attribution.

'Network: the last great film about media' has no comments