Grow Paradise is literally about growing paradise on Planet Earth. The focus is to establish “food forests” throughout local communities and the entire planet via permaculture techniques, spreading ideas about health and self-reliance, and offering high-integrity products from individuals that are growing organic foods and medicines.

Anthony Anderson started Grow Paradise in 2011 after planting his first organic food forest in 2008. He created a garden of Eden near his parent’s home in Minnesota to ensure that “a living grocery store” would be available to them during their retirement years. He realized that growing our own food and planting food forests around the globe will completely solve many of the troubling issues currently facing humanity and the planet. 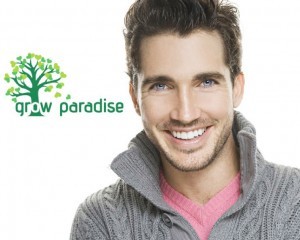 Anthony joined us this morning LIVE from France gracing us with his passionate and positive ideas about permaculture and creating our own sustainable paradise on earth.

Anthony Anderson is a male model by trade but his heart and soul is deeply-rooted with permaculture and organic living. Because of his modeling career, he delved deep into green living and healthy eating, which eventually brought him to permaculture and the idea that we can literally create a paradise planet instead of using our energy to be mad at “bad guys”.

With a focus on consciously designing our habitat to be more paradise-like, he spends much of his time spreading the ideas of permaculture online as well as being outside to harvest wild foods, collect springwater, and take photographs of nature.

'Anthony Anderson – GROW PARADISE – What Really Matters is the Food – November 8, 2012' have 2 comments