The trial of Vernon Hershberger captured the attention of health freedom and food rights activists all over the nation. Mr. Hershberger has been the face of farmers all over America trying to provide good, wholesome and healing REAL food to consumers. Why is this against the law? Why was his food embargoed and blue dye added to his raw milk by tyrannical out of control inspectors? Vernon Hershberger shares with us his story, a story of a simple farmer, with simple practices, delivering excellent products. This is an excellent show and Vernon is a real hero.

BARABOO, Wis., May 26 (UPI) — The acquittal of a Wisconsin dairy farmer on the most serious charges for selling raw milk products is a “victory for the food rights movement, his lawyer said.

The case of Vernon Hershberger, 41, has drawn national attention from supporters of the raw, unpasteurized milk movement, the Milwaukee Journal Sentinel reported Saturday.

The Sauk County Circuit Court jury in Baraboo deliberated about 4 hours before returning a verdict of guilty on a charge of violating a holding order placed on products on the Hershberger farm following a raid on the farm in the summer of 2010, the Journal Sentinel reported.

Hershberger could be sentenced to as much as a year in jail and fined $10,000.

Hershberger was found not guilty of the other three charges, which included operating an unlicensed retail store selling raw milk and other products and operating a dairy farm and dairy processing facility without licenses.

The trial’s outcome will establish a precedent, said the Weston A. Price Foundation, a raw-milk legalization advocacy group.

“This is a victory for the food rights movement,” said Elizabeth Rich, an attorney for Hershberger.

Wisconsin farmers generally may not sell unpasteurized milk directly to consumers, as it may contain pathogens that result in serious illness, the newspaper said. Many people believe unprocessed milk contains bacteria that support the immune system and provide other health benefits.

Thanks to the Farm to Consumer Defense Fund, Vernon Hershberger had legal defense which ohterwise would have put him out of business. If having the right to consume real food is important to you please consider donating to the fund. 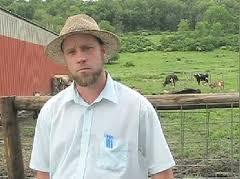