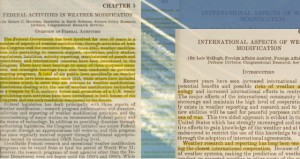 Newly surfaced documents add to an already sizable pile of evidence that the U.S. government has been manipulating the weather for many decades.

Just under 750 pages, the document from May of 1978 illustrates just how large the geoengineering, weather-modification cover-up really is. The beginning of the document reads as follows:
“The Federal Government has been involved for over 30 years in a number of aspects of weather modification, through activities of both the Congress and the executive branch. Since 1947, weather modification bills pertaining to research support, operations, policy studies, regulations, liabilities, activity reporting, establishment of panels and committees, and international concerns have been introduced in the Congress. There have been hearings on many of these proposed measures, and oversight hearings have also been conducted on pertinent ongoing programs.”
.
Although the document clearly states that the Federal Government has been involved in activities that involve weather modification, the general public is still largely unaware that this is even going on. Many still adamantly oppose the idea that this is even possible. If Congress has known about this since at least 1978, why is the public still so clueless about weather modification?

Chemtrails by Any Other Name

Geoengineering is also often referred to as ‘chemtrails‘ and also ‘cloud seeding,’ because geoengineering is most commonly done by seeding the sky with particulate matter. Many independent investigators and whistle-blowers concur that the government is dumping large amounts of aluminum, strontium, barium and even coal ash in the sky in an attempt to manipulate the weather. This has been verified by numerous USDA studies and is discussed in detail in the film, Why In the World Are They Spraying.

The document goes on to explain how cloud seeding actually can affect weather patterns, thereby affecting the local population of people, plants and animals in a given area:
“There’s no question that during a dry season, cloud seeding aggravates conditions to produce drought, and during a wet cycle, it triggers even more rain and probably floods.”

Furthermore, to explain other implications and real-life situations affected by cloud seeding, an article published by ‘a nationally circulated publication devoted to organic agriculture’ states:

“According to complaints we get, the pattern is still remaining as it did in the early 1960’s. When a thunderstorm appears to the west or is starting to build up, a plane will move in mysteriously out of nowhere, and maybe fly once or twice along the leading edge of the thunderstorm, disappear, and the thunderstorm just practically dissipates.
.
In a recent article contributed by the Tri-State Natural Weather Association to a nationally circulated publication devoted to organic agriculture, the following evils, supposedly brought on by weather modification, were cataloged:

1. Cloud seeding has been responsible for the great 5-year drought in the Northeast United States. 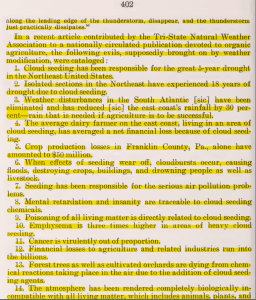 2. Isolated sections in the Northeast have experienced 18 years of drought due to cloud seeding.
3. Weather disturbances in the South Atlantic [sic] have been eliminated and has reduced [sic] the east coast’s rainfall by 30 percent – rain that is needed if agriculture is to be successful.
4. The average dairy farmer on the east coast, living in an area of cloud seeding, has averaged a net financial loss because of cloud seeding.
185. Crop production losses in Franklin County, Pa., alone have amounted to $50 Million.
6. When effects of seeding wear off, cloudbursts occur, causing floods, destroying crops, buildings, and drowning people as well as livestock.
7. Seeding has been responsible for the serious air pollution problems.
8. Mental retardation and insanity are traceable to cloud seeding chemicals.
9. Poisoning of all living matter is directly related to cloud seeding.
10. Emphysema is three times higher in areas of heavy cloud seeding.
11. Cancer is virulently out of proportion.
12. Financial losses to agriculture and related industries run into the billions.
13. Forest trees as well as cultivated orchards are dying from chemical reactions taking place in the air due to the addition of cloud seeding agents.”

This document is only one in a list of many pieces of evidence that reveal the extent of geoengineering. Another resource is the extensive list of patents relating to geoengineering.

It seems that nobody working in the government has any intent to tell us the truth about geoengineering, weather modification or chemtrails, so until the time comes when the government comes clean we’ll have to rely on the work of independent investigators to uncover the truth.