THE MORNING SHOW
with Patrick Timpone

We welcomed Dr. John Coleman to the show today to discuss one of our favorite topics: Who’s controlling the world and what’s their agenda? Dr. Coleman presented some clear and straight forward answers. One hour was not enough to do justice to his research so please take time to browse his website and have a look at a mind bending lecture he gave back in the 1990’s. It’s excellent! 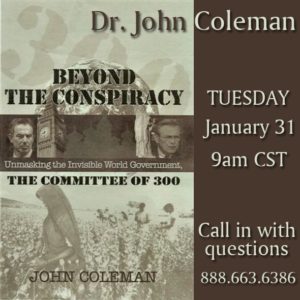 For nearly 35 years, John Coleman, a political scientist and economist, has been reporting and writing on the subject of political conspiracies and world affairs. Coleman has published 17 books and hundreds of reports analyzing the power structure of the world. He argues that a relatively small group of elite, “The Committee of 300”, are pursuing a goal of one-world government. John is probably best known for his books “The Conspirators’ Hierarchy: The Committee of 300” and “The Tavistock Institute of Human Relations”, both heavily referenced by other conspiracy researchers. He’s also written: “The Rothschild Dynasty”, “Diplomacy by Deception”, “What You Should Know about the United States Constitution and the Bill of Rights”, “The Club in Rome”, “We Fight For Oil” and many others. Since 1970, he has produced “World in Review”, a bimonthly news magazine.(Bio reprinted from Red Ice Radio)