F. William Engdahl has written on issues of energy, politics and economics for more than 30 years, beginning with the first oil shock in the early 1970′s. He has written Seeds of Destruction: The Hidden Agenda of Genetic Manipulation, A Century of War: Anglo-American Oil Politics and the New World Order, Gods of Money: Wall Street and the Death of the American Century and Full Spectrum Dominance: Totalitarian Democracy in the New World Order.

“There is so much turbeulence and incalculable shockwaves put in motion…setting off instabilities…the world isn’t working as it did 20 years ago.”

Mr. Engdahl has become a monthly contributor to our show and we feel he is one of the best voices in the world of geo-politics.Todays topics:

-Currency Wars: The Dollar is only strong by default

-The Fallacy of Peak Oil

-The Wild Politics of Hungary and Their New Constitution

-Update on The Strait of Hormuz

– The Economic Stranglehold on Iran

-The U.S. Lead Occupation in Iraq:The truth about how life has really changed in the past 10 years

-Understanding the Science of Oil 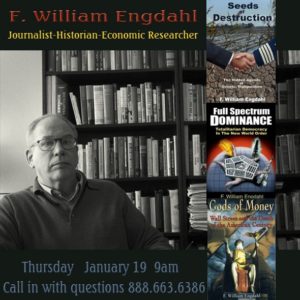