“The Gods of Money still put their pants on one leg at a time”-F. William Engdahl

Welook forward to talking with Mr. Engdahl every month as he always seems to be able to adjust the programming, so to say. There istwo sides to every story and we can count on him to deliver the one we haven’t heard about, especially when it comes down to oil poilitics. We covered a lot of territory today in this exciting show covering topics such as:

-The Chinese are buying up real assets and companies, making a shift to manufacturing higher quality products

-Austerity vs. growth in EU leaning towards growth = inflation

-The Mess in Greece-The European overnments have shot themselves in the foot with the Greek crisis. What started out as a banking crisis in Greece has ended up as a National Government Debt Crisis. Wages have been forced down, pensions cut and unemployment has spun out of control leaving the Greek people in despair

-The biggest myths Americans have toward oil

and so much more. Enjoy the show! 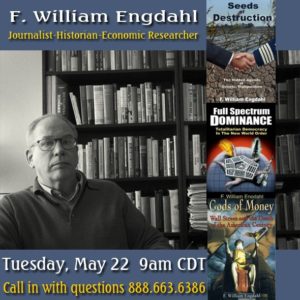