An alarming new meta-analysis published in the journalNutrientstitled, “Cardiovascular Effects of Calcium Supplements,” brings to the forefront theserious though mainly downplayed health risks associated with calcium supplementation, concludingthey increase the risk of heart attack by 27%-31% and the risk of stroke by 12%-20%.[1]

The study based its findings on randomized, placebo-controlled trials, and did not find a lessening of the observed adverse effects with the co-administration of vitamin D. The study noted that the increased cardiovascular risk associated with calcium supplements is consistent with previous epidemiological observations that higher circulating calcium concentrations are linked with cardiovascular disease in normal populations. They postulated that, “There are several possible pathophysiological mechanisms for these effects, including effects on vascular calcification, vascular cells, blood coagulation and calcium-sensing receptors.” They concluded that, “[T]he non-skeletal risks of calcium supplements appear to outweigh any skeletal benefits.”

The entire study can be viewed on PubMed Central, the free digital database of full-text scientific literature in biomedical and life sciences.

In past articles, we delved deeply into the cardiotoxicity of the limestone-, bone meal- or oyster shell-based calcium supplements that dominate the mainstream marketplace,[2][3] and also the fatally flawed bone mineral density (BMD) guidelines set forth by the World Health Organization in the mid-90′s, which essentiallyreclassified aging as a diseaseby using the bones of a young adult (25 year old) at peak bone mass as the standard of normality for older women of all ages (i.e. theT-score). As a result of these guidelines, millions of asymptomatic women were suddenly told they had a new ‘bone disease’ called osteoporosis, and millions more were told they had ‘pre-osteoporosis’ or ‘osteopenia,’ an entirely nonsensical disease classification, arbitrarily conceived, and with no basis in biological or physiological fact. [read more:Osteoporosis Myth: The Dangers of High Bone Mineral Density]

This new review only further exemplifies the need for a paradigm shift in the way we understand and contextualize women’s health issues.First, we must understand that osteoporosis, in the real-world sense of ‘weak’ and ‘fracture prone’ bones, is not caused by a lack of mega-dose calcium derived from limestone.[4]Nor, is it caused by a lack of calcium-rich milk, as the dairy industry has spent quite a lot of time and energy convincing the general public. While one can certainly drive the BMD higher through supplementation, the over-consumption of calcium-rich dairy products, or even worse, chemical ‘therapies’ such asbisphosphonates, the resulting ‘improvements’ in BMD may come at the price ofdecreasing bone quality and the quality and length of the life of the patient as a whole. It is also extremely important to note that research now exists showing that calcium supplementation may actuallyincrease hip fracture risk.[5][6]

Furthermore, women in the US and Westernized countries die primarily of heart disease, with cancer a close second,and not complications associated with a bone fracture.[see CDC’s top causes of death in females from 2009 below; osteoporosis doesn’t even make the top 10]. Insofar as calcium supplementation increases the #1 cause of death in women, their use constitutes a serious, avoidable health risk, removing entirely any justification for their promotion in improving the overall health picture of women. 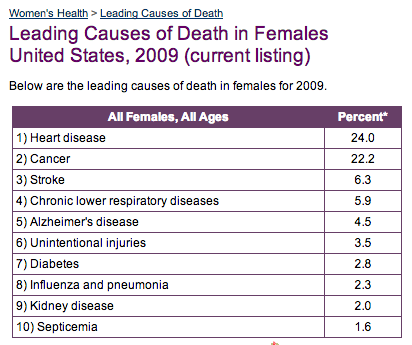 Considering that nearly 1 in 4 women will die of heart disease, reducing the risk for such an event is extremely important. Therefore, the National Osteoporosis Foundation (NOF) calcium supplementation guidelines (see screenshot below), which suggest women consume between 1,000 mg-1200 mg calcium daily (a range which would require most women take supplemental calcium), place women at significant risk of harm. Considering the NOF name calcium supplement manufacturers such as Bayer-owned Citrical as official corporate partners, it is unlikely they will alter their recommendations anytime soon, even despite the increasingly unequivocal evidence that their guidelines (see below) are doing harm. 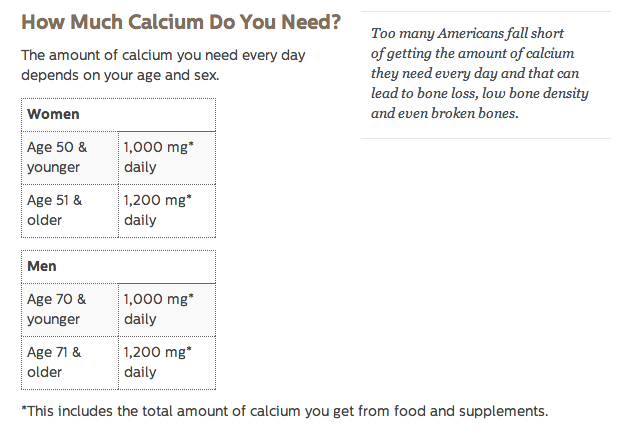 Essentially, what women (and men) need to do with this information is to return to commonsense.First, don’t swallow stones, shells and ground up bone.Second, our bones become less dense as we age for a reason – it is a natural process, and using high-dose calcium, hormone therapy, drugs, or whatever means at our disposal to drive our bones to a denser level thanis natural, should be expected to have unintended, adverse health effects.Thirdly, despite the evidence provided by x-rays to the contrary, our bones are not made of chalk or limestone. Our bone is a living, breathing and highly complex tissue, which requires amino acids, vitamin C, magnesium, vitamin K2, regular exercise, and adequate and optimal hormone levels to thrive and maintain structural integrity and strength.Finally, far more important than BMD itself isbone quality, and whether or not folks are actually living in their bodies, aware of their movements, their surroundings, so that when they do fall, they can respond in a way that does not result in harm, or a fracture.This is why vision and gait disorders are far more important than BMD in determining fracture risk.

Given all of this, we need to break free of the “calcium myth,” the “bone density myth,” and the myth that our skeletal system is first and foremost an object of biomedical surveillance and treatment, and only second that integral part of the vehiclethrough which we live.

Finally, instead of popping calcium supplements, let’s get back to the nutritional basics. Explore sources of plant-derived bone minerals likeKale, orbone-building broths such as Miso, which modulate the hormonal dimension of bone health in a way that also protects against cancer. Look intoplums, or evenpomegranate, as these fruits contain great power in decelerating hormone-related bone mineral losses women experience as their ovarian reserve taps out between 40-55.

For additional research, use ourHealth Guide on Bone Health

[2]GreenMedInfo.com,The Calcium Supplement Problem: As Serious As A Heart Attack

[4]Calcium, while important, is but a singular mineral component involved in the creation of the highly complex, living-and-breathing tissue which is human bone. From the embryonic bone from which its crystallized form is born, comprised as it is of protein, to the complex hormonal factors that help to ensure proper bone turnover, our skeletal health is as a complex as our digestive or neurological health; simply throwing calcium at the problem won’t make our bone, or us, any healthier.

About the author:
Sayer Ji is the founder and director ofwww.GreenMedInfo.comand an advisory board member at theNational Health Federation, an international nonprofit, consumer-education, health-freedom organization.

He co-authored the bookCancer Killers: The Cause Is The Cure, and is currently co-authoring another book with Tania Melkonian entitledEATomology: An Edible Philosophy of Food.

'Why Most Calcium Supplement Recommendations are DEAD WRONG' has no comments