Tullio Simoncini is a Roman doctor specializing in oncology, diabetology and in metabolic disorders. He has a strong opposition to any type of intellectual

conformity, which is often based on suppositions without foundation or worse, on lies and falsities.

Here are just a few of the topics we covered:

– Alkalinity not necessarily a good thing?

– Some alternative therapies have led us down a black hole

– Dr. Simoncini says we should have no fungus, contrary to what others are saying

– That it is a fungus “overgrowth” as the problem 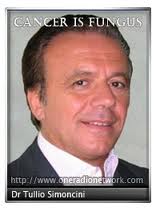 Simoncinis personality is pervaded by a strong humanitarianism, which triggered him to reflect, because of the impotence of medicine when faced by the pain of patients, on how little and inadequate medicines fundamental knowledge is. This empathy for the pain of others has been the constant motivator on the path of his personal life.

This show was originally broadcast on February 23, 2009