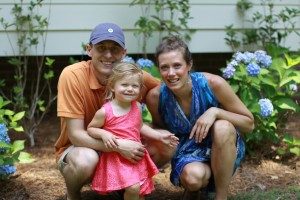 The Equilibrium Diet was gradually created by Katie Player between September 2010 and June 2013. Katie is a Ph.D. economist and professor and in the summer of 2010, her husband, Lance, suddenly became very sick. Katie and Lance were very standard Americans, eating processed foods, refined sugar and wheat, fast food and drinking beer with friends. Over the coming weeks, medical doctors struggled to figure out what was wrong with Lance.

Desperate for solutions, Katie began doing her own research, asking her own questions and applying basic economic principles. These were not the questions of a medical doctor or a nutritionist – they were the questions of a common sense economist. Why are we sick of being sick all the time? What is true health and who are the healthiest people in the world and throughout history? What and how did/do these healthy people eat?

What Katie discovered in answering these questions went against what most “experts” would tell you. The discoveries or “rediscoveries” chartered a new path to extreme mental and physical vitality. Within 90 days, Katie had overcome chronic fatigue, chronic yeast infections, and asthma. Lance’s gallbladder problems, chronic athlete’s foot and prostatitis disappeared. They both had more energy than they had their entire lives. Within 6 months they had overcome Stage 4 Candida overgrowth, seasonal allergies and sinusitis. One year after their dietary changes, Katie and Lance had overcome every physical ailment they had ever had and were happier, less angry and more at peace than they had ever been. Katie shares her journey in her first book, Atheist to Enlightened in 90 Days: Featuring the Equilibrium Diet.

The Equilibrium Diet is the synthesis of 4 years of virtually nonstop holistic health and detox research and trial and error. It is a flexible and efficient diet that minimizes the energy and work the body must expend in daily life – this means more energy, faster recoveries, healing, weight loss and health – physical, mental and emotional vitality.

Katie decided to find the answer herself. She was then finishing her doctorate in economics. Looked for ways to maintain equilibrium, which maximizes benefits and minimizes costs. How do we minimize the cost of digestion?

First did liver and gall bladder flushes. Then realized the significance of the timing of when we eat, studied Buddhist monks and primitive tribesmen.

Equilibrium diet explains why paleo and vegetarian diets work. Meat has easily absorbable mineral content. Vegetarians benefit from not having liver congestion at night. Eating heavy protein after 2 pm means liver never has a chance to clean itself.

Juice fast enabled them to change diet and get off pharmaceuticals easily. Listened to their bodies, not what scientists said. 90 days later, Katie, who had been an atheist, had an abrupt spiritual awakening at 3 am on 12/26. She felt like a grid was trying to press into her. She prayed for the first time in her life, really hard. Said Lord’s Prayer, a voice chimed in with her, and she felt a golden energy exploding through her body. Had new spiritual knowledge, a realization we’re all connected and love. Saw there was something beyond the physical, that she had always existed. Erased any fear of death. Felt a power in her radiating outward. Knew that diet is the key. Treat your body as divine and you will remember your body is divine.

Ayurveda says best time to eat meat is high noon. Last meal for monks is at noon, will have herbs and teas after that. Chinese meridian show stomach most active between 7-9 am, small intestine later, with highest peak consonant with Chinese meridian clock. Liver cleans all during the night 11 pm-3 am.

Cleansing the organs is critical to being able to do the diet.

Energy went through the roof. Had no sickness for a couple years. An Equilibirum Diet adherent says: When I do get sick, it’s solely from stress; I take some herbs, intensity is less, duration is shorter. The liver will clean your entire life for you, emotionally, spiritually, and physically. The body is a thought form.

Respects Classic Chinese medicine that honors timing of when to eat foods.

Get as much good fat as you can. Grass-fed beef, coconut oil, cacao butter, olive oil, fish.

People who have been eating SAD have digestive juices so depleted that they’re not getting nutrients out of their food, especially raw foods. Vegetarian diet difficult for them. 80-90% of diet should be what grows naturally in your area.
For many people, neurotransmitters aren’t communicating quickly enough because there aren’t enough minerals for the electrical circuit to run fast.

Ancestors only took what they needed. Took the life of an animal with reverence and awe for the animal. Different than mindlessly eating KFC chicken. Difference in quality of meat if CAFO or pasture-finished.

Animals who eat plants vs. animals who eat meats. We get to choose who we want to be. Do what works for your body. Want all 20 different amino acids balanced in your body.

After following the diet, Katie became an empath, very sensitive to other people. Wasn’t grounded, feelings were pent up, was painful. Needed to learn to separate. Found a grounding meditation that changed her life; she does it every day.

Katie’s book is “Atheist to Enlightened in 90 Days: Featuring the Equilibrium Diet”.

Katie Player on the Equilibrium Diet and falling into believing in God, June 8, 2017

'Katie Player – Atheist to Enlightened in 90 Days: Featuring the Equilibrium Diet – June 8, 2017' has no comments