Is Hemp Oil A Cure All?
Rick Simpson does and since 2003, he has treated over 5,000 people suffering from aliments, such as melanoma skin cancer, glaucoma (brain cancer), lung cancer, leukemia, scoliosis, arthritis, diabetes, obesity, anorexia, and herpes, claiming, “Seventy per cent of the patients that follow the protocol become cancer-free after ingesting 60 grams of high-quality oil.” However, this alone does not make Rick extraordinary. What makes Rick so extraordinary is that he provides this service for no personal profit. Yes, he treats people for free.
Rick’s crusade, “Crush Cancer,” has seen him imprisoned and forced him to flee his native country—Canada. Now residing somewhere in Europe in an undisclosed location, he is unstoppable. His drive and personal commitment to take on the big pharmaceutical companies and lawmakers to promote hemp oil as a cure for cancer has gained greater and greater awareness and a ground swell of support in both cancer treatment medical circles and public debate globally—on a daily basis—today.
Rick Simpson doesn’t believe he himself is extraordinary. But he passionately believes that the properties of hemp oil are. Hemp, one of the oldest imperial (plant–based) medicines, has been widely accepted as the cure for civilizations’ individual aliments for thousands of years until its prohibition since the 1920s by lawmakers being influenced by the greed of big pharmaceutical corporations globally.
Bio taken from: http://www.thextraordinary.org/rick-simpson

-The danger of sativa oils

-The con game perpetrated by the government

-Why juicing cannabis makes no sense and poses potential dangers 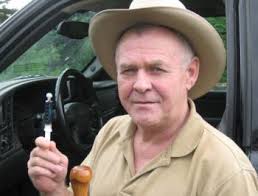 'Rick Simpson – The Healing Properties of Hemp Oil and the Con Game Perpetrated By the Government – February 12, 2015' have 2 comments