Professor of the History of Science at Stanford University

The cigarette is the deadliest artifact in the history of human civilization. It is also one of the most beguiling, thanks to more than a century of manipulation at the hands of tobacco industry chemists. In Golden Holocaust, Robert N. Proctor draws on reams of formerly-secret industry documents to explore how the cigarette came to be the most widely-used drug on the planet, with six trillion sticks sold per year. He paints a harrowing picture of tobacco manufacturers conspiring to block the recognition of tobacco-cancer hazards, even as they ensnare legions of scientists and politicians in a web of denial. Proctor tells heretofore untold stories of fraud and subterfuge, and he makes the strongest case to date for a simple yet ambitious remedy: a ban on the manufacture and sale of cigarettes. 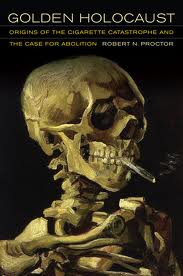 'Robert Proctor – The Conspiracy Behind the Deadliest Artifact in History – October 4, 2012' have 2 comments

Patrick Timpone | The Best Person to Follow When Choosing What to Eat Is You | July 6, 2022

Fred Dashevsky and The Real World of Money | Headed Towards A Deep Recession | July 6, 2022