Vitamin B12 deficiency is a public health crisis that even most doctors don’t know exists. Millions suffer from it, but few are diagnosed. Left untreated, it causes permanent, crippling nerve damage—and too many patients don’t get treatment until it’s too late.

Sally Pacholok joined us this morning for a passionate lesson on B12 deficiency, which often goes undiagnosed. She shares with us her own personal story and how she found herself on the path of writing about this silent epidemic.

Could It Be B12? uncovers how standard medical practice has for decades misdiagnosed vitamin B12 deficiency, condemning countless patients to chronic poor health and life-altering permanent injury. Few patients are tested for B12 deficiency, even though it’s a common disorder that can be easily diagnosed and inexpensively treated. The manifold symptoms of B12 deficiency can look exactly like a myriad of different diseases, misleading doctors to misdiagnosis. B12 deficiency can mimic dementia, multiple sclerosis, early Parkinson’s disease, diabetic neuropathy or chronic fatigue syndrome. It can cause depression and mental illness, infertility in men and women, or developmental disabilities in children. 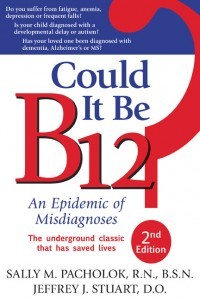