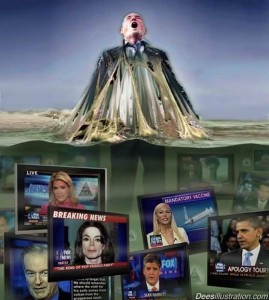 The mainstream news just seems to get sillier and shallower with each passing day. Our world is becoming incredibly unstable, corruption is everywhere, we are on the verge of another massive economic crisis, government debt is absolutely exploding, war could erupt in the Middle East at any time and signs of deep social decay are everywhere, and yet the mainstream media seems absolutely obsessed with reporting on celebrities and scandals.

It would be nice if the mainstream media would do a lot more true investigative reporting and would actually try to answer some of the difficult questions that we are being faced with.Unfortunately, most of what passes for “news” these days is essentially just “infotainment”. That is one of the reasons why we have seen such a surge in the popularity of alternative news outlets in recent years. People are searching for the truth, and they know that they are not getting much of it from the mainstream media these days.

One thing that I enjoy doing is pointing out some of the really silly stories that pass for “news” these days. Let’s take a quick look at some of the headlines on the front pages of some of the biggest news sites on the Internet right now.

“Zimmerman stocks up on Cheetos in jail”

“Taco Bell may take on Chipotle with ‘Cantina’ menu”

“Lighter Side of ‘Tanning Mom'”

It must be a slow news day, right?Wrong.

Our world is changing faster than ever before and bombshell stories are breaking at a pace that is really hard to keep up with.

Sadly, the mainstream media in the United States is pretty much a total joke at this point.

Can you answer these 25 questions that the mainstream media in the United States does not seem to have answers to?….

1 – What in the world was Mitt Romney doing at the Bilderberg Group conference? Reporter Charlie Skelton claims that he has four different eyewitnesses that saw Romney there….

Four eyewitnesses on the hotel staff told me Willard Mitt Romney was here at Bilderberg 2012. My four eyewitnesses place him inside. That’s one more than Woodward and Bernstein used. Romney’s office initially refused to confirm or deny his attendance as Bilderberg is ‘not public’. They later said it was not him.

2 – Is the financial crisis in Europe ultimately going to result in the creation of a new “European superstate” dominated by Germany?

3 – Shouldn’t we be alarmed that a thousand tons of radioactive water from the Fukushima nuclear disaster is being poured into the Pacific Ocean every single day?

4 – Why is the mainstream media in the United States so silent about the grave threat that Fukushima reactor number 4 poses to the entire northern hemisphere?

5 – Why are radiation levels in the rain falling in southern California five times above normal?

6 – The CDC is located in Atlanta, Georgia. A number of people down in Georgia have recently been attacked by flesh-eating bacteria. Is there any connection?

7 – Why is the EPA now using drones to spy on farmers in Nebraska and Iowa?

8 – Is the Obama administration actually going to take military action against Syria before the November election?

9 – Are we on the verge of seeing World War III erupt in the Middle East?

10 – Why has Citigroup been put in charge of issuing “digital-identity badges” to individuals that work for Defense Department contractors?

11 – Why are “pre-crime” cameras being installed in mass transit locations all over the United States? Just check out the following example….

A new breed of security cameras can supposedly detect terrorism and crime without a human judgment call–and mass transit agencies are shelling out big bucks for the product. San Francisco’s Municipal Transit Authority, which oversees the city’s MUNI trains, has signed a contract with security firm BRS Labs to deploy cameras to 12 subway stations that use algorithms and machine learning techniques to spot anomalous behavior.

12 – Why is the Department of Homeland Security monitoring the use of hundreds of different keywords on social networks such as Facebook and Twitter?

13 – Why are smart meters being aggressively pushed down the throats of American consumers when most people don’t want them in their homes?

14 – What does the fact that “organized shoplifting” is rapidly rising in America say about the level of social decay in our nation?

15 – Why has the U.S. Congress been spending hundreds of thousands of dollars on printing costs related to meaningless declarations? The following is from a recent Daily Caller article….

The U.S. Senate has spent hundreds of thousands of dollars on printing costs associated with passing simple resolutions declaring observances such as ‘National Chess Day,’ ‘National Safe Digging Month’ and the ‘Year of Water.’

16 – Why was the U.S. government spending 20 million dollars to develop a Pakistani version of Sesame Street?

17 – Why aren’t Americans being warned that the share of the U.S. national debt per person is on pace to triple by the year 2037?

18 – Why are parents being arrested for cheering at high school graduation ceremonies?

19 – Why did swarms of large spiders suddenly attack large numbers of people attending a religious festival in one town in India recently?….

It may sound like a B-grade horror movie, but residents of the town of Sadiya, in Assam state, say that on the evening of May 8 as they were celebrating a Hindu festival swarms of spiders suddenly appeared and attacked them, The Times of India reported.

Over the next few days two people — a man, Purnakanta Buragohain, and an unnamed school boy — died after being bitten by the spiders. Scores more turned up at the town’s hospital with spider bites.

20 – Why have there been so many “cannibalism incidents” in the United States lately?

21 – Why does the United Nations want to govern the Internet? Why aren’t more people getting upset about their attempted power grab?

22 – Why has Planned Parenthood been allowed to set up a clinic inside a high school in Los Angeles?

23 – Why is the U.S. military developing a plan to implant microchips into our soldiers?

24 – Why are some schools in Texas planning to use RFID tracking chips to monitor the movement of their students? Just check out what one school district down in the San Antonio area has planned….

Northside Independent School District plans to track students next year on two of its campuses using technology implanted in their student identification cards in a trial that could eventually include all 112 of its schools and all of its nearly 100,000 students.

25 – Why have TSA agents been caught committing so many crimes? The following is what one member of Congress recently had to say about a new report detailing dozens of serious crimes that TSA agents have committed in recent years….

TSA needs to immediately remove themselves from the human resource business. This report details highly disturbing cases where pedophiles and child pornographers wearing federal law enforcement uniforms are not only patting down unsuspecting travelers, but in many cases stealing valuables from their bags. Enough is enough. It’s time for Congress to step in and demand accountability from Administrator Pistole.

Do you have any other difficult questions that should be added to this list?

Please leave a comment with your feedback below….
This article first appeared here at the American Dream. Michael Snyder is a writer, speaker and activist who writes and edits his own blogs The American Dream and Economic Collapse Blog. Follow him on Twitter here.

'Can You Answer 25 Difficult Questions That The Mainstream Media Refuses To?' has 1 comment