The Georgia Guidestones are a collection of standing stones near Elberton, Georgia. Built in 1980, they are primarily composed of six slabs of granite: one central pillar, four “major” stones that fan out from the center, and a capstone. The capstone has engravings on all four of its sides in four different ancient languages, all of which read, “Let these be guidestones to an Age of Reason,” when translated. The major stones are each engraved on both sides, and each side contains text in one of eight modern languages asserting ten guidelines.

These guidelines have proven extremely controversial, causing speculation and rumors of conspiracy that go far beyond northeast Georgia.

The Georgia Guidestones are at once a Rosetta Stone, an astronomical observatory, and a road map for rebuilding civilization. Theories of conspiracy, occultism, and apocalypse surround this monument, and it has been called a “prism of meaning” by many who have studied it. At the heart of this confusion is the missing piece of the puzzle: who was the mystery man that designed and funded the project?

Conspiracy theorists surmise a global plot on the part of shadowy group of men to reduce and subjugate the world’s population and create a “New World Order.” Others believe that the man behind the monument was a Rosicrucian, and that the stones are representative of that group’s occult manifestos. Are the stones proof of a Satanic conspiracy or a testament to a Cold War psychology of nuclear annihilation? 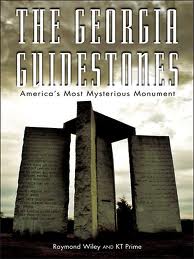 Raymond Wiley is a historian, broadcaster, and producer based in Athens, Georgia. Arguably the foremost expert on the Georgia Guidestones, he has appeared on numerous TV and radio shows.

'Raymond Wiley – The Georgia Guidestones: Americas Most Mysterious Monument – April 12, 2012' has no comments