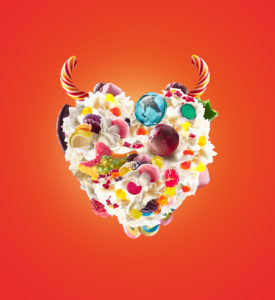 According to Ray Peat (and relevant to Candida)…

“There is a great anti-sugar cult, with even moralistic overtones, equating sugar craving with morphine addiction. Sugar craving is usually caused by the need for sugar, generally caused by hypothyroidism. When yeasts have enough sugar, they just happily make ethanol, but when they don’t have sugar, they can sink filaments into the intestine wall seeking it, and, if the person is very weak, they can even invade the bloodstream and other organs.”

Sugar has been used as a medicine for thousands of years.

I’m pushing the envelope by eating five pounds of white sugar a month.

That’s not much sugar compared to billionaire Warren Buffet, who ingests 50 teaspoons of high-fructose corn syrup in the five cans of Coca-Cola he drinks every day.

“In the last thirty years, one-quarter of the calories I’ve consumed have come from Coca-Cola, and that is not an exaggeration. I’m one-quarter Coca-Cola; I’m not sure which quarter.”

“Henry Ford, says Matthew Jacob, feared the sharp crystals of granulated sugar would cause internal bleeding in his stomach. Certain painkillers, including aspirin, can lead to stomach bleeding. But sugar? No way.”
.
.