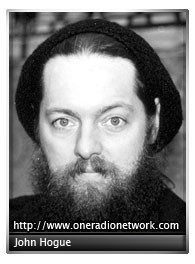 John Hogue, defines himself as a “Rogue” Scholar. He has traveled three times around the world studying meditation disciplines, reporting on new religious movements, cults, and compiling a reference of the world’s prophecies concerning the future of humankind in a new millennium. Considered the world authority on Nostradamus and other prophetic traditions, Hogue is critically acclaimed for his ability to cut through the social, religious, and nationalistic projections of prophets and their interpreters to find threads of insight they all share.

Futurist, accurate forecaster in his own right, creator of what some people call the Huffington Post of prophecy websites,hogueprophecy.com, Hogue has received wide international recognition appearing on over 100 television and 800 blog and talk radio shows on five continents: North and South America, Asia, Australia and Europe.

He has the most multimedia exposure of any prophecy scholar in history at present and syndicated reruns of his many documentaries and radio appearances air several times each month around the world.

A prolific author of 75 to 105 articles each year for his high traffic website hogueprophecy.com, Hogue has published 19 books in 19 languages. He currently lives on an island in the Pacific Northwest.